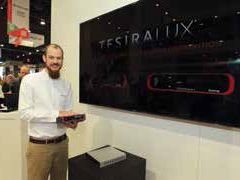 Biamp states that TesiraLUX is the only platform that enables system designers to handle audio and video within a single software environment. Biamp says that total system latency is guaranteed to be less than two frames (33 ms at 60 Hz), including scaling, compression and network transit, because of the way that AVB/TSN networks are configured unlike non-AVB offerings whose manufacturers can quote maximum latencies for individual stages of signal transmission, but not an end-to-end figure.