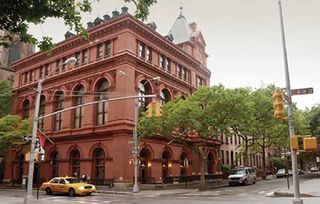 The society renovated the building a decade ago, and it continues to make improvements to ensure and enlarge its mission. Recently, it expanded the building’s event space to 200 seats and overhauled its AV system and that of an adjoining classroom and gallery space.

“The Brooklyn Historical Society wanted a high-performing AV system with a lot of flexibility and simple, foolproof operation,” said Peter Starr, owner and chief designer at the Starr Entertainment Group, the firm contracted to design and install the new system. “That’s the trend these days. Not only will the society use the space for its own artists, lecturers, and musicians, but it plans to rent the space for any conceivable event type. It’s therefore competing with hotels and other venues with event spaces.”

Inputs to the system include a Blu-ray player, a DVD player, iPod docks, and XM Satellite Radio together with a bevy of sound reinforcement and wireless microphones. A 16-channel Soundcraft FX16 mixer on a rolling rack helps with live music events and the performing arts. A Peavey MediaMatrix NION N3 system handles all of the processing and routing.

Two eight-channel Ashly ne8250 amplifiers power 14 JBL AC 1895 two-way loudspeakers and a pair of EAW UB82s. Four QSC RMX 2400 amplifiers power four EAW SB180 subwoofers. “In previous installations, the Ashly ne8250 amplifier has proven itself to be tremendously reliable and powerful,” Starr said. “At 250Watts per channel, they have a lot of ‘oomph’ and stand up to scrutiny in demanding listening situations.”