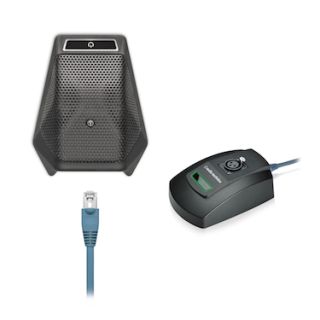 Audio-Technica’s ATND971 bridges the gap between audio and IT as a wired microphone that transmits audio and control data together over Audinate’s Dante network protocol. An ethernet connection allows the ATND971 network microphone to communicate across an existing network of Dante-enabled devices and with the microphone’s programmable user switch, control any of those devices at the push of a button. The ATND8677 microphone desk stand fits gooseneck microphones with standard XLRM-type outputs, offering installers simplicity when adding gooseneck microphones to Dante audio networks.

Biamp’s Tesira SERVER and SERVER-IO allow for networking flexibility through the integration of multiple protocols, including AVB, CobraNet, and Dante, all within a single system, with the DAN-1 Dante network card. The Dante-based ATND series microphone can be incorporated into a Tesira system, providing quick audio and control signal setup as needed. In addition to normal audio input controls, the integrated processing block allows for predetermined button and LED behaviors, as well as the option to control both discretely. Each processing block for the ATND series can accept multiple microphone inputs, so individual units with the same control configuration only need to be configured in Tesira once. A tutorial on configuring Audio-Technica’s Dante microphones for a Tesira system can be found here.