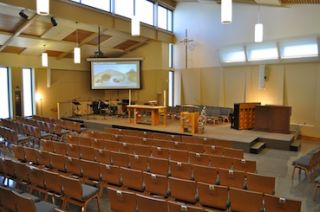 The new facility is big, bright and airy, with an open feel and modern audio and video systems, including a pair of Iconyx IC Live digitally steered line array systems from Renkus-Heinz. As Scott Schmidt of Reno-based JC Productions explains, they were fortunate to have the room's acoustics working for, rather than against them.

"The architect who designed the space has done a number of traditional sanctuaries, and really did a fantastic job," said Schmidt. "Most of the walls are not parallel, and there's a sloped ceiling that's about 60 feet at its highest point. The wall behind the choir is angled about five degrees, which really helps with reflectivity."

Like many of today's churches, Good Shepherd has been expanding outside the traditional Lutheran model and offering a range of services to cater to a wider congregation. "They offer a traditional Lutheran service early in the morning, followed by a more contemporary service with full band, and then one more traditional service," said Schmidt.

"The band is using all amplified instruments, running through the PA, and they're all using in-ear monitors, so that does help keep the sound under control somewhat," Schmidt said. "They're using electronic drums, and there are no amplifiers onstage. But it's still a pretty live space, and they needed a sound system that could steer the acoustical energy away from the walls and into the seating area."

Schmidt opted for a pair of IC Live ICL-FR columns, mounted on either side of the proscenium. Low-frequency reinforcement is covered by an IC215S-FR subwoofer under the stage lip. "We needed a very versatile system, and the IC Live fit the bill," he explained. "Spoken word intelligibility is always the priority, but the system had to provide the full-range musicality needed for a live band as well."