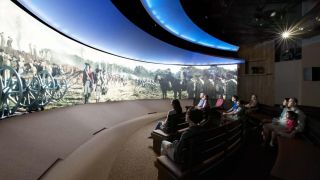 Yorktown, VA, occupies a unique place in American history as the site of the last major battle of the Revolutionary War. The new American Revolution Museum at Yorktown, administered by the Jamestown-Yorktown Foundation, depicts the drama and hopes of the revolution through period artifacts, immersive environments, and interactive exhibits and theaters, including the experiential Siege Theater.

The new museum engages visitors in the tumult and excitement of the nation’s founding. The 170-seat Introductory Theater shows the 20-minute film, “Liberty Fever,” which features accounts of the American Revolution told by a 19th century storyteller. It sets the stage for the permanent exhibition galleries devoted to five themes, including “The British Empire and America” and “Revolution, From Lexington and Concord to Yorktown.”

The galleries culminate in the 4D experiential Theater where 40 to 70 visitors at a time are transported to the Siege of Yorktown complete with wind, smoke, lightning, and thunderous cannon fire. The theater’s 180-degree surround screen immerses visitors in the thrill of the of the allied American and French victory over the British Army.

“The client wanted to play back high-quality video and did not want a PC-based system that required software maintenance, so the solid-state A/V Binloop HD filled the bill,” said Whitlock system designer Phil Raymond. “The Jamestown-Yorktown Foundation, which runs the museum, has used Alcorn McBride equipment in other properties and suggested we consider the A/V Binloop HD for their new museum. It has proved to be a very stable system and a rock-solid choice for the Siege Theater.”

In addition, Whitlock installed an A/V Binloop with audio cards to provide 23 channels of audio for the Siege Theater. “We are using a server with Dante Network Audio to manage channel allocation from the Dante card option in the A/V Binloop,” Raymond said. “There are 13 loudspeakers with program audio, four subwoofers, and butt kickers in the seating.”

A second Alcorn McBride A/V Binloop HD feeds a number of other rooms in the museum, including the Introductory Theater and its “Liberty Fever” presentation.

“Our relationship with Alcorn McBride extends to all of the museum work we’ve done,” Raymond said. “Clients understand the value of Alcorn McBride equipment, too. The gear we installed in 2004 for at the Jamestown Settlement history museum is still running, and the Foundation has been very happy with it.”

Although the American Revolution Museum at Yorktown gallery exhibits are already open to visitors, it the museum will hold its grand opening celebration and dedication ceremony this spring, marking the completion of its outdoor interpretive areas.