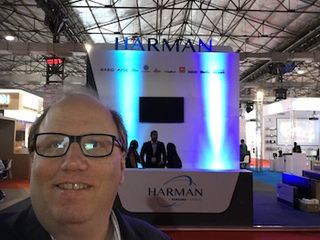 Arriving at the show for the first time, I noticed differences between convention centers in the U.S. and Europe and India. There were multiple shows going on within the complex; however, each of the individual buildings was smaller. The show occupied an entire hall, with classrooms and concessions within the hall. The show floor is dramatically smaller, and there is no lobby area to speak of. To provide a sense of scale, it is about 20 percent of the size of the U.S. show: 206,055 square feet (19,143 square meters) for India compared to almost 1,000,00 square feet (92,903 square meters) in Las Vegas, NV. The size of the hall is not a valid measure of the show. The key to the show laid within the people and the meetings.

Once on the floor, I was surprised by the location of booths. There are certain stalwarts that InfoComm U.S. regulars expect to see in the front row of the hall, and these companies might not even have been at InfoComm India. Coming in the main entry the first three booths were platinum sponsors Kramer, Delta, and Harman Professional. The size of the booths was definitely smaller than in the U.S. and Europe, but relative to the overall show floor, they were proportionally larger.

As I walked the floor I saw, for the most part, the same trends as I did at InfoComm in Orlando. The application that seemed to attract the most interest from attendees was video integration. Within this, interests ranged from looking at videoconferencing solutions, to displays, to mounting. Audio had a presence as well, but it was definitely a smaller focus compared to U.S. or European shows.

Exhibitors seemed to miss one large opportunity: catering their demo music selections and tonal characteristics to local music. This issue does not just occur in India; I have noticed it at many shows on foreign soil, especially across Asia. Playing Steely Dan to demonstrate audio is still popular, but those who played local music seemed to have more engagement and attraction.

The level of knowledge was very wide ranging, not any different than a U.S. show. I was surprised, however, at the overall attendance. While attendance was lower than I expected, the quality of the attendees mattered. I observed a high level of knowledge and interest across all sectors—avoiding the “tire kickers” we all love to hate. I believe the investment in attendance and the way attendees were invited also had something to do with this.

I was thoroughly impressed by the amount of show resources allocated specifically to support women and their roles within the emerging technology—one of the three seminar rooms was dedicated to a WIN event for an entire half day. This shows commitment and growth both within the country and within our industry. I was proud of AVIXA’s efforts on this front.

Dave Labuskes, CEO of AVIXA, invited me to stop by their booth for a chat. If you know Dave, you know he is genuinely passionate about the state of the AV industry and is active on social media. His invite came directly from a humorous Twitter exchange (we all know humor is a great ice-breaker!). As I am in the process of changing jobs, Dave led the discussion with shared experiences, industry insight, and even acted as a sounding board for me. This was not a press or business meeting; Dave simply took the time to chat as a fellow #AVTweep. His invitation and conversation embodies the new attitude of AVIXA, and I hope this is what the association continues to do for all of the industry.