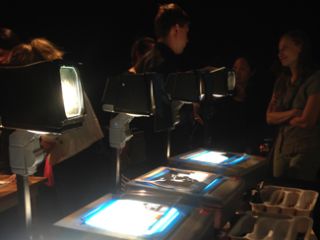 To call it a shadow puppet show would be incorrect — yes, the visiting show Ada | Ava from Manual Cinema does tell its story through silhouettes projected onto a screen, but it’s so much more than that. It’s more of a manual animation, an entire short film presented by hand each night by its team of performers.

The show itself is an incredible experience — I highly recommend it, but throughout the performance, I couldn’t help but wonder how the performers were able to recreate this film each night. Each movement, each scene change, even the carefully timed lighting flashes, are all done by hand.

Following the show, the audience was invited (and encouraged!) to come down and poke at the gear.

The show incorporates two screens, one at eye level, and a second above it. Because the projector plays the mirror image of what it’s picking up, a camera behind the lower screen captures the image and feeds the final image through a digital projector above the audience. This double-screen technique also allows the actors to perform the live-action parts of the show over the projected background to create one image.

Ada | Ava is at the 3LD Art & Technology Center in New York City through July 26. For more information, visit http://manualcinema.com/adaava/.