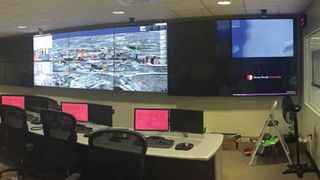 Staying on top of security for a campus with a couple dozen buildings and cameras can be a busy job. What about one with 124 buildings and more than 1,000 cameras?

That was the challenge for Massapequa, NY-based integrator IntraLogic Solutions (ILS) when it was tasked with consolidating the security infrastructure at the State University of New York at Stony Brook (also known as Stony Brook University) into an intuitive, responsive control room capable of alerting administrators at a moment’s notice in the event of any kind of emergency.

In addition to the tremendous amount of camera feeds from hallways, entrance and exit points, and gathering places around the 1,039-acre Long Island campus, the university also needed a central way of monitoring alerts from the many other alarm systems throughout.

“At Stony Brook, they had a lot of existing technologies, and cameras, and card access, fire alarms, and burglar alarm systems, and the challenge was they were all living in their own independent silos,” said Lee Mandel, CEO of ILS. “And the chief found the need for, during an emergency or activation of a critical situation, to bring it all together.”

For Mandel, the solution was simple: A visualization system from Hiperwall, a hardware-agnostic, software-based video wall system, which ILS had been utilizing for several years for clients, including large government agencies.

One of the key advantages of the Hiperwall system, according to Mandel, is its flexibility. “We’re taking any video source—any sort of video feed—and we’re pushing it to any location that we want, whether it be in the situation room that we built for Stony Brook, or out to someone’s phone, or computer, or remote location,” he said.

For the control room, or “situation room,” as Mandel called it, ILS installed a solution based on displays from LG and NEC. In the center is a 3-by-2 video wall comprised of 55-inch NEC no-bezel displays to display the Hiperwall mapping solution, surrounded by eight LG commercial-style TVs that provide extra data and television streams.

The Hiperwall visualization solution provides a map-based way of analyzing all of the system’s endpoints. After plotting and coding the campus’ facilities into the system, operators get a system that’s intuitive to use—a vital consideration for emergency situations. “So we’re looking at what looks like an enhanced Google Map, showing all the facilities throughout the university,” Mandel said. “And when we drill down to a particular building, we can look at all the access within that building, such as the fire alarm panel, the burglar alarm system, the cameras. And then during an activation or an emergency, the system is able to quickly fly to any of those buildings, pull it up using the Hiperwall system on the screen, and drill down and zoom into point for us.”

In addition to ease of use, another key advantage of the Hiperwall solution is its adaptability: Since it’s a purely software-based solution, as technology advances down the road, Stony Brook can upgrade the situation room’s computers and software without compromising the system.

Since completing the installation in 2015, the feedback on the system has been very good, according to Mandel. “It’s been incredible, and it’s always exciting to do an interview after something’s been in use for two years,” he said. “I always find that first year is going to be the sink-or-swim moment, and we’ve definitely swum. We use it as a demo facility and take a lot of our clients there, because it is something that’s extremely impressive. They’ve used it in several activations, it’s helped in several situations where they’ve had fire situations in a couple facilities, potential threats for active shooter situations, so it’s really been effective for them to put this together.”