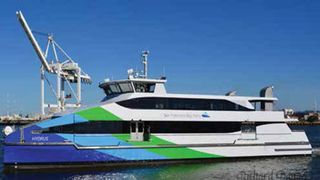 Digital signage has infiltrated most every corner of our lives outside the home. From a journey through the supermarket to a hotel lobby hospitality experience, consumers count on the digital display screen as a source of information and entertainment in public spaces.

With a fleet of 12 boats, the ferries give local residents and tourists an array of water transport options across multiple destinations, including AT&T Park, Mare Island, and Oakland Jack London Square.

Audio had long served as the sole source of information for consumers who visit these business and organizations—and it remains an important communication and branding element in the big picture. This is especially true in public transportation, from bus and train stations to more tourism- and leisure-focused activities.

However, digital signage has gradually become more prominent in these scenarios. This was partially driven through the federal government, which in recent years developed new ADA requirements for public transportation. The guidelines state that audio announcements over PA systems must be visible for the hearing impaired.

This was a driving force behind the design and installation of a digital signage system for the Water Emergency Transportation Authority (WETA). The local government organization operates the San Francisco Bay Ferry, which serves Bay Area communities with ferry terminals including San Francisco, Alameda, Oakland, South San Francisco and Vallejo. With a fleet of 12 boats, the ferries give local residents and tourists an array of water transport options across multiple destinations, including AT&T Park, Mare Island, and Oakland Jack London Square.

As WETA formulated its plan to rollout a digital signage system for visual information, it approached Electronic Systems Support (ESS), a systems integration firm that specializes in audio, video, voice systems, and data networks. ESS had already been involved with these boats as it installed the PA, alarm, and security camera systems still in use today.

The ESS team opted for a Scala digital signage system to create the content displayed on the vessels. The visual information includes a variety of messages including community information, safety messages (at the beginning and end of each journey) and location-based detail.

“One of the more engaging elements is the ‘chart plotter,’ which is essentially a high-resolution Google map that shows your exact location at that moment, and gives passengers a clear idea of where they are on the bay,” said Andy Herbst, project manager, ESS. “That is complemented with information about the boat, including restroom, concession, and exit locations, as well as municipality information such as upcoming votes.”

Initially, the boats used a very basic digital signage system. The installation utilized a dual modulator to output digital signage content from a computer for distribution to TV sets.

“The TVs had to be set for a certain channel, and inevitably, someone would change the channel programmed to the modulator, resulting in a blank image,” said Herbst. “We were also relying a lot on coaxial cable. We needed a better solution to distribute video to the displays, and eliminate the channel-change problems.”

Having experience with AV installations on corporate and higher education campuses, Herbst was familiar with the many switching and distribution systems on the market to help solve this problem. He opted for Atlona, which allowed him to take a single output from the Scala system to distribute content to multiple displays.

Electronics Systems Support installed an Atlona distribution system to send content, including a variety of messages including community information, safety messages, and location-based detail, to the vessels’ displays.

The transition also allowed him to retire the analog cabling, and slim down the infrastructure using Cat-5 network cabling and HDBaseT extensions.

Herbst noted that the upgrades have been simple from a systems integration perspective, which have allowed him to quickly make changes without interruption to the onboard digital signage service.

“We built and tested our racks in our shop, and then pulled marine-grade category cable to the individual display location throughout each boat,” Herbst said. “The marine-grade cable is a requirement: that means a low-smoke, zero-halogen cable, which is actually more cost effective on category cable than coax. We add connectors to the end of each cable, attach them to the HDBaseT output of the distribution amplifier in the rack, and then do the same with the AT-UHD-EX-70-RX receiver at each individual display.”

The HDMI-to-HDBaseT conversion has been a big efficiency boost as well, from a time and labor perspective.

“Once you get over 30 feet with HDMI, you have to add amplification to the signal, and some of these displays are up to 150 feet away from the headend,” Herbst said. “We wanted to provide the best picture quality possible without running digital cable, QAM, or HDMI cables all over the boat.”

Behind each display, the ESS team added a wall plate with an RJ45 jack, along with a 3-foot piece of category cable. The Atlona receivers were then mounted to the wall brackets within the display mounts. The HDMI cables were quickly added, with content immediately present on the screens upon powering on the system. Occasionally, Herbst presses the EDID button on the transmitters to confirm the right-quality HDMI signal is passing through the system, but beyond that, no extensive programming or monitoring is required.

“This solution has saved us hours in installation and setup time compared to working with the QAM modulators, setting them to specific channels, and making sure the right resolutions come through the displays,” Herbst said. “The old way was easily a two-hour job per display. Atlona turned this into a plug-and-play job.”