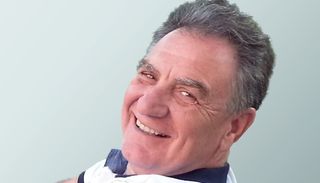 Let’s take the measure of the man from a few of his favorite things: Frank Zappa, The Great Southern Music Hall, Yankee Stadium, and, of course, musicians everywhere.

Long before he was associated with AVI-SPL, George Douglas was a student at the University of Florida in his native state, and realized that despite his love of music, he couldn’t play the guitar or “sing a lick.” So he started designing and building sound systems for local and touring bands passing through the Great Southern Music Hall in Gainesville.

“I consider those to be my first integration projects. Many of those ‘little bands’ became famous; I didn’t,” he said, not without a laugh. “We had Altec Lansing A7s with a 15-watt high frequency; they would blow out at the drop of a hat. I was still in college and no one else was doing this engineering, building, and mixing.”

After graduation, Douglas made a pivotal move to LA, with a stopover in Boulder, CO to build a recording studio. Enter Zappa, and the chance for Douglas to design and build Zappa’s UMRK Mobile (Utility Muffin Research Kitchen).

“Frank Zappa was my mentor,” he said. “Frank was one of a few musicians who owned his own sound system. We had big A1 cabinets. I knew John Meyer and I told Frank to get MSL3s and an amp, and it blew him away. He got 24 of the cabinets for his European tour; these were the first Meyer Sound MSL3s. And we also built our own fly rig.”

Douglas recorded more than 400 live concerts, assisting in remixes, in the UMRK, which he built. The mobile facility, with 102 channels, 150-channel cabling system, and 48-track recording capability, revealed Zappa as a fanatic for good sound, he said. “This made my job extremely enjoyable. The very first MTV live simulcast from the Palladium in NYC was from that truck—and I have other stories from that time that can’t be printed!”

Other mentors, Douglas said, were not people, but jobs. “Each job always pushed me do something new. Luck is one thing, but working hard and having a great cadre of friends is important when you start out by building everything yourself. I built my first monitor console; it’s the love music and electronics that’s the natural way, our way of being a musician.”

Success was a path lined by various projects for Douglas. “If I look back, one job was a perfect stepping stone to the next level,” he said. “What happens is that everyone you meet goes off to other jobs and, if you’re a good worker, they call you and you get other opportunities without hunting for them.”

That’s how Douglas came to design systems for Disney Imagineering’s Epcot Center in 1982. “We had a $55 million AV budget, and we were tasked with designing every audio device from the ground up,” he said. “This provided an amazing learning ground, and I met many amazing engineers during that period.”

The transition from Zappa to Disney was quite entertaining in itself, Douglas said. “But I still say today, that it is what’s behind the scenes that really makes the guest forget the magic sound field they are in throughout a Disney park visit.”

Multi-year stints with Dolby Laboratories as director, motion picture division—with the introduction of Dolby SR—and then international sales with Meyer Sound—with the introduction of HD-1 and MSL-10, the first self-powered loudspeakers—ended with another stretch at Imagineering, for the EuroDisney theme park project. Douglas installed the first MediaMatrix unit into Disney’s Aladdin’s Magic Carpet Ride.

He spent the next seven years traveling the world to introduce the product. “One highlight was seeing the Sydney Opera House converted to an all-DSP system,” he said. “When my best customer approached me to work with them, I moved fully into the integration business. I started with SPL, which later merged to become AVI-SPL.”

With AVI-SPL’s global expansion and its established presence since its first project there more than 10 years ago, the Dubai Mall Video Control Center, Douglas moved to Dubai two years ago. “We now have 30 people there, as big as a typical office in the States, and we’re growing. We work on stadiums, international offices, and corporate headquarters. My goals are to work on six more stadiums in Qatar, and the Expo 2020 in Dubai.”

With all those achievements, Douglas still likes to refer to himself as “an old audio dog.” He explains: “Audio is one percent of what we do here. As big as we are, audio is a small piece of it, and we’re not seeing a lot of new guys doing audio; they’re all LED guys or teleconferencing or video guys, but they can’t tune a room. In corporate AV, that doesn’t matter as much, but in live sound, it’s still important.”

Douglas remembers learning everything on the job, for live bands when it was all about mic placement. “Now it’s just about plugins, but we really worked at it. Each level, each room that is bigger, brought a new set of things to learn.”

He acknowledges that he has achieved so much more than he ever expected, from being involved with Epcot, Euro Disney (now Disneyland Paris), and working with Meyer Sound, MediaMatrix, and Zappa.

“I never brag,” Douglas said. “I was never star-struck. A lot of people have done a lot of amazing things in this industry. My biggest thrill was working on Yankee Stadium, and sitting in Steinbrenner’s office, and looking at Mickey Mantle’s first [framed] paycheck.”