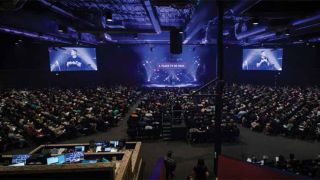 CCI configured a system comprised of 23 RoomMatch speakers that delivers even coverage across 11 seating areas in the Sandals Church in Riverside, CA.

“One of the largest challenges that we faced was working in an industrial commercial building,” said Mark Pearson, CCI’s project lead for the installation. The massive space required some major architectural modifications. “Typically in a warehouse there are columns every 20 feet to support the roof structure. They had to install a mammoth steel structure to support the roof so that they could remove three of the columns.”

The new steelwork, approximately six feet high, lowered the usable ceiling height. “There was no room, in what is considered a rock ’n’ roll church, to put in large J arrays in a stereo configuration,” Pearson said. Happily, the church was already using a system that proved to be an effective solution for the new sanctuary.

“About two and a half years ago they bought a Bose RoomMatch system for a portable church setup and fell in love with the sonic signature of the product,” he said. In a speaker shootout organized by CCI between three speaker brands about 18 months ago, he said, “they again picked the RoomMatch product, because it really fit their culture and their worship style.”

CCI employed Bose Modeler predictive software to configure a system comprised of 23 RoomMatch speakers that delivers even coverage across the 11 seating areas, which are arranged roughly in a fan shape within the rectangular space. The custom-configured system includes 10 different models of RoomMatch modules flown in six arrays: three across the stage in a distributed setup plus three rings of delay speakers. To direct the sound at the seats and away from reflective surfaces, the system incorporates modules with coverage patterns ranging from a symmetrical 120-by-20-degree dispersion, offering broad and even coverage, to an asymmetrical 28-plus-45-by-10-degree spread (that is, 28 degrees of horizontal dispersion from one side of the box and 45 degrees on the opposite side, with 10 degrees of vertical coverage).

Eight RMS218 dual-18-inch subs were installed beneath the stage. The rig is driven by 17 Bose PowerMatch PM8500N network amplifiers and is managed and monitored by a pair of Dante-enabled ESP880 processors.

“The reason we liked the RoomMatch is the simple fact that you can paint the room with sound where you want it to go. The outer delay rings were asymmetrical because we’re covering the triangular shape of the upper stadium seats. We didn’t want to put undesired sound up into the side walls,” Pearson said.

“There are three Yamaha CL consoles driving front-of-house, monitors, and broadcast,” added Duke DeJong, vice president, systems integration for CCI. “Services can be fed to overflow spaces in the old auditorium and chapel, allowing for overflow seating to host over 1,000 additional attendees when needed.”

CCI Solutions implemented a video production suite and broadcast mixdown facility in a room behind FOH. “They’re creating the mix for the recording feed, as well as the live streaming. They stream live to the internet, they record, and they use Streambox to stream to their other two campuses, which capture and DVR the service,” Pearson said.

Stage lighting is provided by more than two dozen Chauvet Rogue moving fixtures, controlled by a High End Systems Road Hog desk. The technical staff can move the fixtures around, but as originally installed, four R2 Washes were positioned on a truss above the stage lip, half a dozen R2 Spots provided back-lighting on the band and drum risers, and a pair of R2 Beams on the upstage deck provided effects. The balance of the fixtures provides coverage from various horizontal and vertical trusses around the stage.

Two new Christie Mirage HD20K-J 1080p digital projectors serve the screens at stage left and right. There is a smaller, custom-configured lyric screen located in the center of the stage set for those sitting at the front and unable to see the main screens. “The switcher is a Ross CrossOver with a 34x34 NK-3G router,” Pearson said. “The three cameras for IMAG are Hitachi ZHD5000s—one onstage and two in the house.”