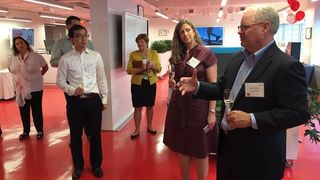 Emulating the look of a modern office, with an open floor plan and lots of natural light, the CEC features various workplace settings—including a boardroom, huddle space, and presentation area—equipped with Ricoh’s newest equipment for collaboration, specifically its suite of interactive whiteboards. Among the goals of the space, according to Glenn Laverty, senior VP of marketing for Ricoh Americas, is to provide the company’s dealers with a showroom in which to demonstrate the capability of Ricoh’s technology.

“It’s a new look, new feel, new approach to business,” Laverty said, highlighting the importance of the CEC in the realignment of the company’s market strategy. In April, Ricoh began moving out of the small and medium-sized business (SMB) space as a direct player by selling a portion of contracts with customers to its dealers. “We believe that our dealers have a strong value proposition in the SMB space, so they get to know those customers, they work in those communities, they’re well known in those communities,” Laverty said. “So we felt that the value proposition that they have served the SMB space very well.”

To serve this market even better, dealers now have access to the CEC, which can be co-branded with content on the numerous video displays to make it look like their own.

“We have content that is fit to address the customer that is coming in,” said Dave Bogart, senior CEC tech analyst, who is in charge of setting up and operating the CEC. “Whether it’s the reps coming up from downstairs, or a dealer coming in from down the street, we’ll make sure we have a home here for them.”

When guests arrive at the CEC, they’re met by Ricoh’s Virtual Self-Service Hologram, a motion-activated AI assistant visually embodied as an animated woman via rear projection onto a translucent cutout of a torso. Named Sarah and equipped with a touchscreen tablet, this novel kiosk can help orient guests to the space and even carry out tasks such as creating visitor badges.

Dave Bogart leads the tour into the boardroom. To the right of the entrance is what is known as the “communications wall,” a tunnel of sorts, with the interior walls serving as a screen for four edge-blended Ricoh short-throw projectors per side. By default, it displays a timeline of the company’s history, but can be customized with nearly any visual content desired. Through the tunnel, visitors enter a circular collaboration room, dubbed the “transactional space,” flanked by four 65-inch Ricoh displays, including two digital whiteboard models.

Adjacent to this is the enclosed boardroom, which is likely to be the highlight of the CEC. Emulating a typical meeting room, with a long table capable of seating 15, the space features an 84-inch interactive whiteboard, which will soon begin shipping with IBM’s Watson technology built in as the Ricoh Intelligent Workplace Solution. Ricoh expects this device—which responds to natural speech to perform tasks such as transcribing and translating meeting dialog into several languages simultaneously, in real time—to have a transformative influence on business efficiency.

“This is in our opinion, the next frontier in terms of collaboration,” Laverty said. “An extraordinary piece of technology backed by the best technical services organization in the business—so we’re quite excited about what’s going to become of this space.”

In addition to its collaboration show spaces, the CEC has a wing dedicated to its large-format printing machines, and other imaging products, such as its Theta 360-degree cameras are also on display.