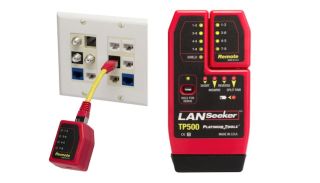 The What Else: The LanSeeker tests for shorts, opens, miswires, reversals, and split pairs and can display connection and fault information on a pair-by-pair basis. It also generates audio tones for use with tone tracers on all pairs. When the unit senses a connection between the main and remote unit, the battery-saving auto-on feature initiates test results within two seconds. The tester automatically powers off within five seconds of the cable being disconnected.