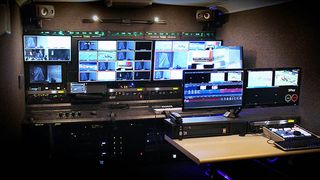 Rejoice, college sports fans, particularly those who root for the teams of Ohio University: your Bobcats games are now more accessible than ever before.

Thanks to a $565,000 project recently completed by iVideo Technologies, a tricked-out mobile trailer on Ohio University’s campus is live streaming a variety of sporting events by way of the ESPN3 network.

A NewTek 3Play system handles instant replay for the Ohio University broadcast trailer. Thanks to a $565,000 project recently completed by iVideo Technologies, a tricked-out mobile trailer on campus is live streaming a variety of OU’s sporting events by way of the ESPN3 network.

“OU is a major customer for us; we’ve designed and installed whole classroom buildings for them and currently are working on a teaching kitchen,” said Mike Sparke, regional sales manager, iVideo Technologies.

Sparke, who also has worked as a freelance tech director for ESPN, just had a feeling that OU would be joining the program. “There aren’t any secrets in this industry,” he said. “My focus is on stadiums, mega churches, and broadcast, and I am always around the business. We’d been talking to OU for about two years before the start of the project. I had seen a similar trailer project at another school, but this is the first we’ve been contracted to do.”

Without a central control on its campus, located in Athens, OH, OU’s goal was to have a production vehicle built for sports and other events. What they needed was a trailer that could meet ESPN3’s strict standards for broadcasting any sport. The new, rack-ready trailer, from Tecnec, is 24 feet long and can be pulled by a pickup.

“We made some modifications to the trailer,” Sparke noted, “adding some additional rack cabinets on work surfaces to make it more efficient and professional. And we used a custom cabinet manufacturer.”

iVideo started building out the trailer in July with a target completion date of just prior to the start of OU’s football season. As it turned out, its first major event rollout, in September, was for a women’s volleyball game.

“Our team included our senior broadcast engineer, Ed Strickland, and we were able to have the work done easily,” Sparke said. “Because it’s mobile, we were able to do all the wiring and install, testing, and setting up at our shop, getting it all ready to go. The advantage of doing everything at our shop was that if something came up, we could work through problems right there.”

“ESPN has a stringent style book for how they want the shows to look on-air, and they have worked that out with Ross to create the look and provide the university with the setup,” Sparke said. “ESPN has designed a bulletproof system, designed so that students can do the show. In fact, OU has started an ESPN broadcast curriculum class.

The only equipment choices left up to the end user are for intercom system and cameras. “I had a list of approved ESPN equipment, and we worked with the OU team to find the best solutions for them,” he added. “Camera choices are a matter of personal preference.”

“The project went very smoothly,” he said. “Of course, with a project of this size there are going to be a couple bumps in the road, but overall I was very pleased with the entire process. Essentially, ESPN sent out a spec sheet with equipment that we had to purchase. Some equipment didn’t have to be exact, but it had to be comparable or better.

“By purchasing and using the same equipment that production trucks nationwide are using, we are giving our students a leg up on the competition when it comes to looking for jobs.

iVideo is not stopping at OU’s goal line. “There are other universities that could use this out there, and we plan to market this solution,” Sparke said. “ESPN continues to grow this network, so we’re going to try to find these schools.

“We recognize that in the TV world today, one area of expanded production is sports driven by ESPN for college sports regional networks. This can be a lucrative vertical for us, so we’re making an effort to identify who needs us. We can give a university a broadcast-quality production facility doing national-quality work. We chase stadiums all the time, and this is about half the cost of what’s in stadiums.”