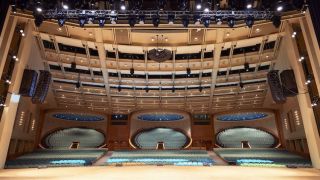 The need to maximize flexibility—the system may have been budgeted for the auditorium, but pieces of it may be used in multiple parts of the building on any given day—and still maintain a consistent sonic signature was a big part of the choice of Kara and Kiva. “Even after direct shootouts against a couple of other highly regarded brands, the choice to go with L-Acoustics was in some important ways more the beginning of the process than it was a final choice,” Miller said.

As is increasingly the case in the world of high-end audio installs, it was all about ROI—return on investment. Clearwing Productions is well accustomed to keeping that kind of data in mind when designing systems, but the process at the Minneapolis Convention Center was more complex. “Going with Kiva and Kara was a terrific option in terms of sound quality, logistics, and overall flexibility,” Miller said. “We can treat it like ‘audio Lego blocks.’ The sonic signature across the L-Acoustics family is so consistent that we can deploy what is best for the room and the event in terms of coverage and never have to compromise on audio quality.”

The complication when showing a good ROI was that none of that flexibility could be considered as factors. “The job—and the budget—was for a system specifically designed for and deployed within the auditorium,” Miller said. “All of us knew that various parts of the system would be deployed throughout the various parts of the convention center, but we couldn’t budget to maximize that.” In fact, the challenge was to get as many mobile elements as possible into an install that was ostensibly for a fixed venue. To that end, designers and audio crew at the convention center opted to power the system with six LA-RAK touring racks each containing three LA8 amplified controllers backed up by five more LA4X amplified controllers housed in L-Cases.