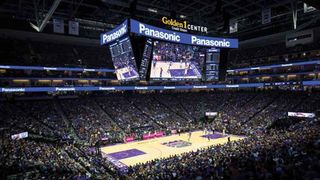 Panasonic’s 84-foot video display, created for the Sacramento Kings, is regarded as the largest single piece of digital signage in the NBA.

In fact, mega projects are actually campuses, often with entire restaurant and entertainment districts, associated hotels, and sometimes small convention centers. “In sports venues, for example, the premium club spaces are still revenue generating on non-game days,” he noted. “Any one of the big names in the corporate world have these large, multi-building campuses where people spend a large percentage of their day, beyond the eight-hour workday. In our world of AV, we want to treat that entire campus as a single AV system, even on one with multiple venues. We need to be able to transmit both audio and video throughout the campus with each venue standing on its own.”

Leamy pointed to SunTrust Park and The Battery Atlanta as an example of a mixed-use area of residential and commercial, “The walk-through neighborhood draws you into the game. Even if patrons don’t go to the game at one of these mega projects, they may arrive hours before to experience a concert in the plaza, dinner, a visit to the hall of fame or a museum. These are really meeting places to support folks through the whole day, and it’s the same with mega corporate spaces.”

A CAMPUS IS A CAMPUS

The concept of a campus goes beyond sports; it’s about the idea of creating campus standards, Leamy said. “The IT department is a factor because we’re transporting AV over the existing enterprise IT network. AV is one of several factors that are dragged into these campus-wide standards. This requires standards that are flexible and comprehensive enough to fit the needs of many different types of users, so we have to create systems and control GUIs that the average user can easily operate.”

This, he added, is the challenge for both integrators and designers. “There is a lot of thought that goes into the engineering and designing for these multiple functionalities that must be presented to the user in a simple fashion. Increasingly, it’s the AV integrators who need to have people onboard who are experts in enterprise network systems.”

Mega projects can absolutely incorporate the latest technology while still being user friendly. “The newest technology is based on IoT,” Hanak said. “As the standards become clear the technology is less costly, easier to use, and more impressive. If I had told you 15 years ago that by now we’d be able to search the web, listen to music, and videoconference on a single device, you wouldn’t have believed me.

“Now, a lot of folks are multitasking and we’re talking about the ‘latest and greatest’ technologies,” he added. “The root technology is here, but it’s on the application side that we’re creating exciting things for fans to interact with. We want to give a platform for our clients to scale beyond the solution because we don’t know where it’s all going.

Another interesting aspect, Leamy said, is the interoperability of the systems that allow owners to monitor, maintain, and adjust most systems that are part of a converged IT full blown network. “This idea of interoperability between audio and video, security, and building management, etc. is driving this. It’s not the technology; it’s the ease of use.”

The solution for preventing scope creep, Hanak suggested, is to have that detailed and “painful discussion” early on. “Regardless of size, many projects have the same elements,” he said. “Look at the holistic scope of the project and be diligent from the beginning. The more energy put in at the front end, the fewer gaps you’ll have to deal with down the road.”

Often, what happens is that people don’t take the time or have a checklist ready at the front end, Hanak continued. “We are checklist driven, we have a scope matrix, and we communicate with our clients to make sure it matches up and to identify any gaps. Doing your R and P (research and planning) will provide clarifications. You have to speak up and address gaps early on. Prioritize items that can cause the most economic damage. And sometimes the bidder who made the biggest mistake wins because if you guarantee the job and you made a mistake in your estimation, why not pick you?”

Audio and video in these projects is more intertwined than ever before. “It’s all about the experience created—especially in sports—for fans’ expectations, encompassing many senses,” Leamy said. “Audio is a big part of that. How do we draw fans into the experience, including real-time social networking, and the many facets of engagement? Audio, more than ever, is not forgotten and pays a big role in achieving that goal.

“Our roles in these mega projects is challenged as these budgets become extraordinarily large,” he cautioned. “It takes a high level of design to ascertain that the correct kind of audio matches the space. Audio is the number-one criteria to convey information; intelligibility measured by the standard of speech transmission index for public address is critical to design. Speakers and components today are advanced, allowing us to provide great intelligibility along with a fun music experience and dynamic musical range.”

In the past, there was a choice to be made between providing a clear announcement or big, fun music. “Now, componentry is capable of offering both, but it’s important to remember that it’s application specific,” Leamy said. “You need the right piece and that goes back to the extraordinary amount of design engineering necessary to meet owner and fan expectations.”

The bottom line, Hanak said, is that these larger projects start earlier. “With more runway you can do things that are more interesting. With a year and a half timeline, you have an opportunity to develop intimacy with the client, to see what’s coming over the horizon, and to make some changes. In general, with this time, we can do some interesting things.”

In any install, most AVL equipment is being used only three to five percent of the time, he said, so it goes without saying that large venues need robust power control. “The ability to turn these solutions on and off at the circuit level not only reduces the overall cost of operations, but also dramatically increases the lifespan of your equipment.”

Bishop noted three major challenges for AVL mega projects, including that of space. “End users want as much public space as possible and often view electrical rooms as ‘wasted space.’ Be aware of your real estate needs when considering power control,” he said. “Relay panels will often take up twice the wall space of motorized circuit breaker panels by virtue of the fact that relay panels have to connect to a conventional circuit breaker panel. Be prepared to defend your territory.”

Allow for future expansion, Bishop added. “If history has taught us anything, it’s that new technology is always right around the corner, and circuiting needs go up, not down. It is much easier to build in expandability from the beginning than to try to add it after the fact. There will never be a time where you will need less circuits, especially in these mega installs. ‘Oh no! I have too many spare circuits!’ is something no one ever said.”

Finally, remember communication is key, he said. “Communicate your needs to the electrical engineer, the electrical contractor, and the end user. Attend all meetings. Don’t just tell them what you need, but explain why you need it. Power control isn’t the shiniest or most sparkly part of the system and it can easily be overlooked by those who don’t realize how important it is. Without power control, none of the other technology will run. Strong power foundations are just as important as the multimillion dollar lighting arrays they support. Spending a little more time explaining your power control needs in the design/pre-construction phase will save a lot of time and money in the long run.”