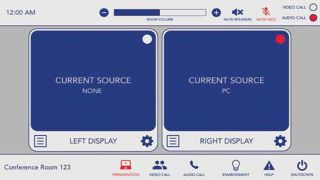 User experience (UX) is how most of your customers gauge the usability of an integrated system. It’s also where a significant amount of the blame gets laid. How many times have you heard, “This ‘Brand X’ system sucks”? Only, when you get into the system, you discover that no, in fact, it wasn’t the control system but the DSP, power sequencer, or some other piece that wasn’t performing. Nevertheless, the face of the system is the user interface and the experience it provides for users.

It has been 10 years since the iPhone was released. From mobile connectivity to apps, the device transformed the tech industry, with a unique impact on the audiovisual industry, as well. The iPhone and the mobile revolution that followed changed users’ expectations of what they wanted from an experience.

“We are getting to a place where the systems will be IoT-like with things happening in the background, making the user’s experience more natural,” said Steve Greenblatt of Control Concepts.

“The AV industry was one of the first to use touch technology,” said Steve Greenblatt of Control Concepts, “but the iPhone just zoomed right by us, and we are still catching up.”

The smartphone market has fundamentally changed how your customers interact with technology. Before this, they might not have had an expectation of how technology should react to them. Now they do. It needs to be uniform, replicable, and with as little downtime as possible. So, how do we get there? With a little bit of Henry Ford.

“You can get whatever color you want, as long as it’s black,” said Howard Nunes, CEO of PepperDash, echoing the revolutionary auto industry leader’s quip about the Model T. “In our space, IT departments present to facilities three or four room types. They can pick from one of those. By doing so, the IT staff can have replacement parts in stock, the UX is consistent throughout the facility, and downtime is reduced to virtually zero.”

Everyone gets vanilla. Yes, there will be special use cases, but even those can, and should, be built around a general standard for UX. This is also not to say that your company has to offer the norm, but you should work with the clients and help them create theirs.

“It’s not enough to fulfill a function,” said Waveguide’s B. Shane Long. “It has to appeal to your senses. It has to be beautiful.”

There are a few ad-hoc standards already in the UX space for AV.

“There is pressure from Cisco’s popular design, as well as the smartphones,” Greenblatt said.

If, as AV integrators, we are in an IT world that thrives on replication and uptime, where do we look for innovation? Where are we headed with UX and systems? We look back to the technology space.

“We are headed to no interface,” Long said. “The system will be responding to someone walking in the room or plugging something in. The best interface is no interface.”

This can take on several aspects. Yes, with RFID or near-field communications, you can track a particular person and recall presets based on who is using the space. You can go back to the vanilla system and begin certain processes when a laptop is plugged in or a wireless device begins transmitting video to the receiver.

“In a small huddle room, there is nothing to touch,” Long said. “Just come in and plug in a laptop or wirelessly project, and the system should just work.”

You also have the ever-present promise, or threat, of voice control. It isn’t just about Amazon Alexa, though that is the most recognized product. Google has Home, and now IBM’s Watson has gotten into the fray by partnering with Harman International.

“We are getting to a place where the systems will be IoT-like with things happening in the background, making the user’s experience more natural,” Greenblatt said.

It’s not enough for a control interface to fulfill a function. “It has to appeal to your senses. It has to be beautiful,” said Waveguide’s B. Shane Long.

“There are also portable presets,” Nunes said. “A professor walks into a classroom and sets the room up how they want it. They save individual presets. Then, because the rooms are built to a standard, they can use another room and recall the presets and use the room just as they had the first.”

Part of what makes this possible is the data that is now available in the backend. The term “big data” is rather overused, but Nunes provided an alternative: “data lake.”

The idea is the expansion of both processor power and interconnectivity. Fifteen years ago, the typical installation had a single processor in a single room. If there was talking between processors, it was limited. Today, most every control system can communicate between processors, as well as to a central server or cloud system. That is where the data lake comes into play.

Server-level systems such as Crestron Fusion, AMX RMS, Extron Global Viewer Enterprise, and others collect vast amounts of data. It is up to the integrators to help the clients utilize the data for informed decisions. This can be something as simple as tracking how often a single room, or every room, uses the VCR button in a system. As a former tech manager, that was a pretty big point of contention. You have a professor swearing they use the VCR, doc cam, or another piece of equipment “all the time.” The data lake allows you to sift through all the information gathered to determine exactly how often that equipment was called upon.

In addition to data gathering, there are the possibilities of AV control systems talking to other entities.

Before the invention of the iPhone and the ensuing mobile revolution, the AV industry enjoyed a sort of standard bearing for touch interfaces and led the way with UX. As the systems get less complex for the user, that is going to put more pressure on the AV integration team to make the user’s experience as good, or better than the one they get with their mobile phones. It is possible; the tools are there, and there are some incredibly talented programmers already making it happen. It is going to be more complex, though. As Greenblatt said, “The easier it is for the user, the more work it is for the programmer.”

Those are wise words to remember as you budget for programming hours on your next job and focus on creating an exceptional user experience.

Tim Albright, CTS is the founder of AVNation and is the driving force behind the AVNation network. He holds a bachelor’s from Greenville College and is pursuing a master’s in mass communications from Southern Illinois University at Edwardsville. He has designed systems for churches large and small, fortune 500 companies, and education facilities. Follow him on Twitter: @tdalbright.