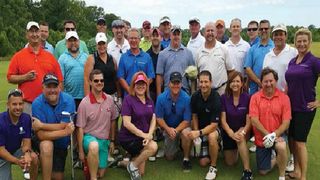 Company: Conference Technologies, Inc. (CTi)
Headquarters: St. Louis, MO
Overtime: As part of a growth strategy, CTi CEO and owner John Laughlin has acquired various other integration firms—some unhealthy from a business standpoint. “He finds an opportunity where there are good people that ‘get’ it, and he’s not just writing a check to buy an AV company that’s already established in the market,” said Houston branch manager Frank Sabella.

Conference Technologies, Inc. (CTi) is a model of success in the world of business—not just for the AV industry. Over the last five years, it has had double-digit growth year over year and has opened handfuls of new branches. In 2013 its staff and revenue doubled. As of 2016, it’s 300 employees strong, with 18 branches across the country. How has this been possible?

“Our vocabulary here is much different,” said Clayton Carter, design consultant at CTi. “A lot of people will say, ‘Oh, you’re an AV company, you do projectors and TVs.’ No, we don’t; we provide communications solutions. We identify a hang-up or a problem in somebody’s business or organization, and we fix that with the use of technology. And any and everything goes these days—nothing is off limits in the way CTi operates as far as providing a solution.”

And when Carter says, “anything goes,” he means it. CTi takes on projects of every scale along the AV/IT spectrum, as long as it’s a good fit. This runs the gamut from outfitting all of Chicago’s Wrigley Field—the stadium and the clubhouses—with audio, to jobs as small as installing a K-12 digital whiteboard or two.

But CTi didn’t always have the puissance to tackle any job, as it does now. Founded in 1988 in St. Louis by Jane and Dennis Woodhouse, the company operated modestly by its current standards for its first nine years, providing custom AV solutions to customers in the area. Things began to change in 1997, when John Laughlin joined the company as vice president. With Laughlin in the fold, CTi won its first of five consecutive St. Louis Fast 50 awards, a recognition bestowed by the St. Louis Business Journal to the city’s fastest growing businesses.

Over the following decade, CTi began to expand into new markets in Kansas, Tennessee, Illinois, Nebraska, and Arkansas via acquisitions. In 2009, Dennis Woodhouse retired and Laughlin took over as CEO; two years later, in 2011, he and his wife Mary took over ownership of the company, beginning its current run of year-over-year growth and expansion into markets stretching from San Francisco to New Orleans.

The CTi team and client partners at its annual golf event at Dalhousie Golf Club in Cape Girardeau, MO this summer. So what’s the secret to Laughlin’s success? “He’s not shopping for AV companies; he’s shopping for people,” said Frank Sabella, branch manager of CTi’s Houston office. “He finds an opportunity where there are good people that ‘get’ it, and he’s not just writing a check to buy an AV company that’s already established in the market. A lot of the ones that he’s brought onboard were actually pretty unhealthy from a business standpoint, but they had good people. And he has the ability to turn the financial situation into a positive thing, which makes everybody work better, faster, and then we start to become successful through that model.”

This people-centric approach also extends into the day to day of the company. According to Sabella, Laughlin prefers to have his employees work in offices with smaller floor plans than the branches’ headcounts might justify, to encourage collaboration and prevent people from working in silos. Practices like this, combined with plenty of two-way communication between branches and corporate, have led to increased efficiency and maximized employee satisfaction. “It is a coaching environment, but it’s also a learning environment,” Sabella said. “That’s really important, the culture, why we really retain the people who work here, and how we’re able to recruit some very high-level people to the company.”

Beyond the great people he’s been able to mobilize, Sabella said Laughlin’s greatest asset is his industry prescience. “I’ve worked for a few different AV companies, and John, far and away, has one of the most incredible talents for seeing the future in terms of how the industry is changing and evolving.” Sabella said that Laughlin was working on preparing for AV and IT convergence five years ago, and that he tries to “reinvent” the company every five years to stay ahead of the curve.

A focus on people, not just on numbers; a pursuit of clients, not projects—that’s the CTi way of success.