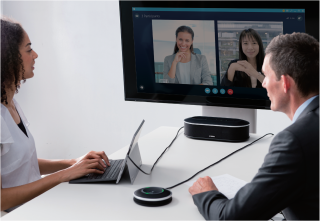 Cvent, a global meeting, event, and travel technology provider, has a growing business with 14 offices, more than 3000 employees, and 142 conference rooms around the world. About 50 of those rooms were equipped with a sophisticated AV system that was challenging for end users and time-consuming to troubleshoot. Just tracing the cables back to the source of the problem was a major task. The system was too complicated to install in the company’s smaller meeting rooms, and the troubleshooting issues made them shy away from continuing to install it in larger ones. So Cvent’s video systems engineer, Jay Jay Kim and his team began exploring options to simplify the company’s conference room technology.

Kim and his team the decision to invest in Zoom, a software-based videoconferencing solution that would allow the company to get rid of much of the issues that complicated the old system, and turn their traditional conference rooms into Zoom Rooms. At the same time, they needed to figure out how to simplify the audio portion of these conference rooms to complement the new software.

“We could have continued using our old microphones, but they didn’t sound great. They lacked the fidelity to pick up sound if someone wasn’t facing the microphone,” Kim said. “So, when we moved to Zoom, we decided to upgrade the audio hardware as well.”

Cvent had several criteria for its new audio system. First, it had to be well-suited for natural conversations during video conferencing, meaning that the sound had to come from the person on the screen as if that person was sitting in the same room. It’s an effect that can’t be achieved with a typical speakerphone. That’s because with a speakerphone, people find themselves looking at the source of the sound—the phone on the desk—instead of the person who’s talking. To avoid those awkward, disjointed exchanges, Cvent needed something other than a typical speakerphone.

Next, the system obviously had to have good sound. With the previous system, a speaker’s words faded in and out, or were lost altogether when they turned away from the microphone to write on the whiteboard. The new system had to produce intelligible sound for all participants, whether they’re sitting in the room or dialing in from the outside. Without clear sound, people disengage, which translates to lost efficiency and productivity.

Finally, the new audio system had to be easy to deploy and use, with little need for intervention from the engineering department.

Cvent chose the Yamaha YVC-1000 unified communications USB and Bluetooth conference phone system. Designed for medium to large conference spaces that call for flexible audio, web, or video conferencing, the YVC-1000 conference phone features a separate microphone and full-range speaker unit that can be placed close to the video display so audio and video from the remote location blend naturally.

“We demo’ed just about every audio product out there, and when we ran our tests on the Yamaha YVC-1000, senior managers unanimously agreed that it sounded the best. It was hands-down the clear winner,” Kim said. “And out of all the products we tested, Yamaha was the only company that made a product that went beyond a speakerphone and felt natural in terms of the sound output into the room.”

Cvent has standardized on the YVC-1000 in all its medium and large meeting rooms and training rooms around the world, as well as in executive offices. Out of 142 conference rooms worldwide, there are about 120 Zoom Rooms, all featuring a YVC-1000 unit. In the larger conference rooms, extension mics are daisy-chained together for clear communication by all meeting participants.

For Cvent, the best thing about the YVC-1000 is its plug-and-play simplicity. In regular use cases, a user simply plugs the unit into a computer’s USB port, presses the auto-tune button the first time it’s used or if it’s moved around, and the device begins working. It learns from the environment with no programming required—a benefit that cuts down on the time it takes to start a meeting and eliminates the need for a specialist to set it up.

As Kim put it, “They say the best systems are the ones users don't notice. The YVC-1000 is that way. Users just walk in, start a meeting, talk to each other, end the meeting, and move on about their day. It has good sound. It works well. And they don’t have to think about it.”

Especially helpful from an engineering perspective is that, unlike all the other hardware Cvent tried, the YVC-1000 uses a standard Ethernet cable—no proprietary cables needed. That quality makes building out new offices much less expensive because the company can use Cat5 cables that were already run to the table, and it’s easy to find people who can run and terminate Ethernet cables to the desired length when necessary. That ease of installation is a real cost-saver because it means Cvent no longer has to hire contractors.

Since deploying the Yamaha YVC-1000 systems, audio-related trouble tickets have gone down to practically none; Cvent’s engineers can now spend their time working on other things.

Kim and his team have also seen a reduction in their help tickets in the form of a reduced number of email alerts coming from the Zoom application; Zoom alerts engineers via email when something in a room is not working, such as a low battery or a disconnected webcam. “With the YVC-1000, we literally fixed all our issues with one product,” Kim concluded.