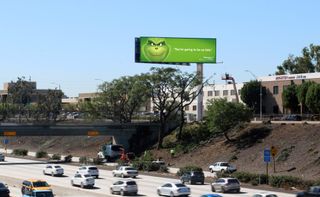 WOW Media, an LA-based digital media company offering innovative solutions for digital out of home advertising, has unveiled four new 1,200 square foot digital billboards in Los Angeles. The two-sided structures are the largest digital signs in the LA region at 20’ x 60’. Situated between the Century Blvd. and Manchester Blvd. exits along Interstate 405, consistently ranked as the nation’s busiest freeway, the signs offer premium exposure to millions of commuters and travelers using the nearby Los Angeles International Airport (LAX). These are also the only digital signs reaching freeway traffic to the highly sought-after communities of West Los Angeles including Beverly Hills and Santa Monica.

“These billboards are truly a game-changer in the Los Angeles media market,” said Scott Krantz, Founder and CEO, WOW Media. “Their massive size and high-definition, LED technology gives brands the ability to deliver innovative, customizable content to consumers – and their unique positioning along the nation’s busiest freeway enables each campaign to reach millions of consumers 24/7 as motorists travel to and from LAX into West Los Angeles, Beverly Hills, Santa Monica and the San Fernando Valley.”

I-405 sees 379,000 vehicles each day, and nearby LAX welcomes 66 million passengers each year. Additionally, the boards have premium placement en route to the new $5 billion Los Angeles Stadium and Entertainment District at Hollywood Park, which will serve as the home base for the NFL’s Los Angeles Rams and Los Angeles Chargers, and the popular concert venue The Forum.

These new signs join WOW Media’s existing network of eight 14 feet x 48 feet full-motion billboards, all situated on key traffic arteries adjacent to LAX. As the region’s only digital billboard network, campaigns can be synced across boards for maximum exposure and impact.