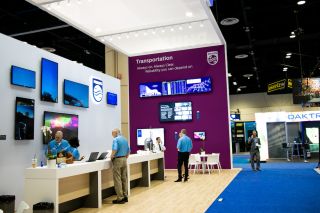 The What: Skykit, which has developed a digital signage content management system (CMS) built on Google Cloud and integrated with G Suite and Drive, has announced the availability of Skykit for Android. The Android offering gives customers an expanded choice of hardware devices that Skykit can support. It also makes Skykit available to organizations that may not be using Chrome. The company debuted the new platform during InfoComm 2019.

The What Else: Android provides more options for specialized player deployments, including off-the-shelf media players, integrated System-on-Chip (SoC) players, and customized options for both touch and display panels. SoC displays eliminate the need to purchase a media player, saving space and power usage, which is especially beneficial to high volume enterprise installations as it reduces installation times, field service costs, and the overall capital outlay.

“Skykit on Android amplifies the product’s inherent flexibility by supporting a variety of devices running Android all while using our existing cloud services,” said Irfan Khan, CEO of Skykit. “This is simply an expansion of Skykit’s ability to serve our customers’ digital signage requirements.”

The Bottom Line: Skykit is a fully managed SaaS built on Google Cloud Platform which means there is nothing to install, update, or patch for the CMS, device administration, or reporting applications. Its media players are supported by cloud services that are built out on the infinitely scalable Google Cloud. The CMS web-based interface lets users create and edit content with tools they already use—such as Adobe Illustrator, Photoshop, InDesign, Google Slides, YouTube videos, web streams and more—and easily publish content to one screen or thousands with the click of a button.