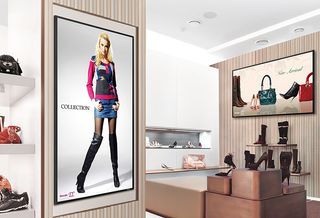 At DSE 2018, Sharp Imaging and Information Company of America (booth 2618) is showcasing smart signage displays and new software alliances formed with the aim of creating a collaborative ecosystem.

“We are super excited about the products and alliances that we will be highlighting this year at DSE,” said Gary Bailer, director of product planning and marketing, Pro AV Products. “With the office becoming increasingly collaborative, we are proud to showcase our new products that demonstrate how we can efficiently work together.”

Sharp is showcasing collaborations with third-party software companies for the SHARP Open Architecture Platform technology found in upcoming smart signage displays, as well as alliances in Sharp’s sales channels, as integrators and channel partners work together to provide creative solutions. To date, Sharp has 17 global alliances for the SHARP Open Architecture Platform technology. Of these, Sharp is demonstrating solutions from six at its booth, including Revel Digital, Ping HD, Enplug, Navori Labs, Onsign TV, and Capital Networks Limited.

These smart signage solutions include a built-in, quad-core SoC controller, which eliminates the need for a separate media player or PC. The PN-B Series displays also offer increased mounting flexibility: whether in landscape or portrait orientation, the displays can be installed face up, face down, or tilting forward or backward at an angle of up to 90 degrees. They can also be suspended from four corners of the rear housing with wires. The PN-B Series is engineered for 16x7 commercial operation.

In addition to the new Smart Signage displays, Sharp is showcasing its new PN-UH Series 4K Ultra HD Commercial displays, which are available as 70-inch class and 60-inch class sizes. These displays are built for 16/7 commercial usage and feature built-in tuner support and business-friendly features for DOOH and commercial environments.

Sharp is also showcasing its new 50-inch class PN-L501C AQUOS BOARD interactive display that joins the 40-inch class PN-L401C model. They are engineered for flexible mounting alternatives including portrait or landscape orientation, as well as flush, face-up, tilt-forward, or tilt-backward mounting.