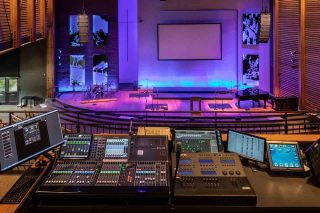 Bethany Community Church (BCC) Green Lake in Seattle established itself in the early 1900s and now has a weekly attendance of approximately 3,000 people across six physical campuses and one on-line. They moved to the Green Lake location in 1969, and in 2005 after outgrowing the building that had housed the church for 36 years, they began construction on a new state-of-the-art worship space that was completed in 2008.

This year the Green Lake location upgraded its sound system with a NEXO STM line array and Yamaha CL5 Digital Audio Console for its 600+ seat sanctuary thanks to Morgan Sound of Lynnwood, WA. The campus has an average attendance of around 1,800 at their three main Sunday services.

In summer 2017, Morgan Sound was contacted by Bart Brueck, the church technical director, to begin the process of looking at upgrading the sanctuary audio system at the main Green Lake campus. The contemporary worship service had progressed to the point that it was time to implement a new audio system and mixing infrastructure. Needs for higher SPL, multi-track recording, virtual soundcheck, new in-ear monitoring, and a separate streaming mixing system were urgent priorities.

“Morgan Sound has been the primary BCC contractor for over ten years and has worked hand in hand with the church technical team to provide equipment and expertise for the main campus and the satellite campuses as well,” said Stephen Weeks, senior A/V consultant for Morgan Sound. “All of the locations include Yamaha or NEXO products so that volunteers have a common operating platform across all of the venues. It was natural that Yamaha and NEXO products would be featured prominently in this venue.”

Weeks said that BCC has invested in Yamaha consoles for many of their campuses over the years. “They currently own QL5, CL3, and TF5 consoles, so the CL console was the logical choice to expand the quality/channel count for the main Green Lake location. The church also has two other campuses that utilize NEXO PS Series speakers.”

Weeks also noted that the church staff received a demo of the NEXO STM M28 that was selected due to its compact size and audio quality. “That, coupled with Dante-enabled amplifiers made the design decision an easy one,” said Weeks.

“NEXO’s commitment to making their products work well together is an important factor, but sonic excellence is really the overriding feature of the STM M28 system.”

The NEXO system includes 8 boxes per side of M28s, 7 ID24 speakers used for front fills on the stage stairs, 6 ID24s used as under balcony delays, 3 RS15-P Dual 15" Ray Subs in custom bunkers under the stage, a pair of PS10 speakers in monitor mode for general onstage use, 4 NEXO NXAMP4X4 and 2 NEXO NXAMP4X1 amplifiers, 5 NEXO NXD104MK2 Dante Cards, an Aviom D800D distribution amp, and a Waves Impact Server With 2 WSG-Y16 Cards for 32 Waves inserts.

A Yamaha CL5 Digital Audio Console and Rio1608-D and 3224-D Stage Boxes were implemented over a new Dante network. Morgan Sound added a Waves impact server along with Yamaha MY cards for 32 channels of Waves plug-ins to extend plug in options. In the broadcast suite, a Waves LV1 server and mixing software was installed to enable a completely separate streaming/broadcast mix to be utilized for the live video stream and audio recording.

“The system sounds warm and full with extraordinary detail and clarity, adds Weeks. “The phase response on the PA is truly fantastic and made system tuning and alignment very straightforward.”

Bart Brueck said that over the last couple years, the church had begun to feel they had outgrown their existing system in terms of fidelity and expandability. “There had been several times where we just simply ran out of headroom; there was nothing left in the system, and yet you could just feel the congregation wanting that little something extra; and it just wasn't there. The NEXO system has just completely blown us away in terms of fidelity and openness. The articulation and evenness throughout the worship space comparatively is night and day. The integration of Waves plug-ins at front of house and with the LV1 system for broadcast coming straight out of Dante, has totally transformed our live stream mix. We couldn't be happier with this installation and can’t imagine making this leap without the incredible team at Morgan Sound under the expert guidance of Stephen Weeks.”