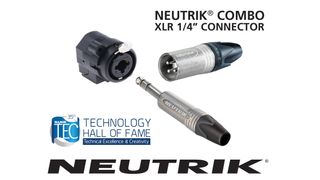 Neutrik’s XLR 1/4-inch Combo connector will be inducted into the NAMM TECnology Hall of Fame during NAMM later this month. TECnology Hall of Fame inductees are voted on by a panel of audio experts including authors, educators, engineers, and other professionals. The award honors innovations that have made a significant contribution to the advancement of audio technology and production.

The TECnology Hall of Fame induction ceremony will take place during the NAMM Show on Jan. 18 at 4 p.m. in the Anaheim Convention Center.

Introduced in 1992, the Neutrik Combo connector was the first hybrid panel-mount connector combining a 3-pole XLR receptacle with a mono or stereo 1/4-inch phone jack. A radical innovation at its introduction and a mainstay of audio equipment today, Neutrik’s Combo connector saves valuable real estate on today’s I/O-packed equipment and simplifies hookups with no compromise in quality. Today’s Neutrik Combo I series and Combo A series chassis connectors are used as inputs on devices such as mixers, active stage boxes, powered loudspeakers and computer audio interfaces and are available in a wide variety of normalling and termination versions. Combo connectors remain highly popular decades after their introduction.

TECnology Hall of Fame founder and Front of House editor George Petersen commented on the inclusion of Neutrik’s Combo connectors into the Technology Hall of Fame, saying, “The Neutrik Combo I Series connector launched exactly when an explosion of low-cost project studio and live performance consoles and loudspeakers were hitting the market and it made a profound impact in terms of how sound is created and reproduced. Equally impressive is the fact that this connector remains extremely popular and is still in use every day—27 years after its debut.”

Fred Morgenstern, Neutrik USA’s product director, reflected on the inclusion of the Combo I Series’ prestigious award. “Everyone in the Neutrik organization is very proud of the induction of our Combo connectors into NAMM’s TECnology Hall of Fame. These really are brilliant devices that were outrageously innovative at the time they were introduced. They took the market by storm, and they changed pro audio forever. We are also extremely proud that, with this honor, Neutrik has become the first and only connector manufacturer with two products in the Hall of Fame. This speaks volumes about Neutrik’s innovation.”

In 2017, Neutrik's speakON speaker connector was inducted into the NAMM TECnology Hall of Fame.