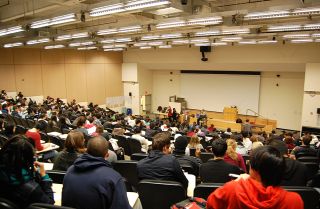 The 2018 State of Video in Education report from technology video provider Kaltura reveals a sharp uptick in higher education institutions’ use of lecture capture, up 21 percent from 65 percent in 2016 to 79 percent this year. There is a strong appetite for capturing more than just the classes taking place in standard lecture halls too, with 10 percent of respondents saying they already capture over half of all classes wherever they take place, and 31 percent keen to follow their lead. Overall, 88 percent of respondents across higher education and K-12 either already use lecture capture tools or intend to in the future.

Based on a survey of more than 1,500 educational professionals, staff, technologists, and students from around the world, this fifth annual report from Kaltura looks at the influence video is having on education and where educators see the future of video. The survey was conducted online during April and May 2018.

The use of video by students for assignments is on the rise, at 69 percent this year, up from 59 percent in 2017. Interestingly, video feedback on student assignments is also growing and is now used by more than a third of institutions (35 percent)—up from 27 percent last year—perhaps due to the growth in remote learning.

The survey also found there is a groundswell of adoption of more advanced video functionality. Closed captions are in use at over half (52 percent) of institutions today, while 34 percent use interactive video quizzes to help students learn more effectively. Mobile apps that make it easy for students to watch videos on the move, or offline, are used by 39 percent of institutions, and a further 53 percent are eager to add this capability.

Other findings include growing momentum for video creation among students in K-12 (primary/secondary) institutions, where 21 percent report that over half of their students are involved in creating (as opposed to simply watching) video; among higher education respondents, the figure is a little lower at 15 percent.

Digital literacy remains high on the agenda as a critical skill for today’s students in an era of fake news and 95 percent view video as an important part of digital literacy. A resounding 97 percent feel it is important to continue to raise the level of digital and video literacy among both teachers and students. The good news is that 83 percent of students are already considered to be highly digitally literate, with teachers snapping at their heels with 78 percent.

Looking ahead, 97 percent think that interactive videos, which encourage engagement and help students to learn, will be important; similarly, 97 percent anticipate that self-paced curriculums and personalized learning paths will be of considerable value to many students; and 94 percent see predictive analytics as a game changer in education, helping to boost learning outcomes.

The study also found that video has a positive impact on student achievements (84 percent), on increasing educator collaboration and professional development (83 percent), and on streamlining the onboarding process for new students (80 percent).

“Video-based learning experiences continue to expand and improve,” said Dr. Michal Tsur, Kaltura’s co-founder, president, and general manager—enterprise and learning. “I am excited to see usage trends on the rise, along with broader distribution of the various tools both in the hands of professors and students. Looking at our 2018/19 roadmap we continue to invest in the areas of video capture tools, interactivity, quizzing, and accessibility. We are particularly excited about the possibilities opened with our introduction of interactive personalized video learning paths, which coupled with powerful analytics, can significantly improve learning experiences and outcomes.”