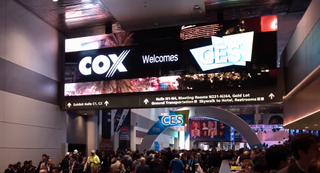 In 2017, the Las Vegas Convention Center (LVCC), in conjunction with Cox Business and Hospitality Network, began transforming its digital infrastructure with the integration of NanoLumens’ AWARE display management platform, with the aim of simplifying system monitoring and content distribution for more than 15 LED and LCD displays that are dispersed in nine locations. Now LVCC has further expanded its digital footprint maximize its advertising reach for CES and other major trade shows. They worked with Cox Business and Hospitality Network to install two seamless, back-to-back 40-foot NanoLumens LED displays over a main visitor walkway.

“After the successful launch of LVCC’s AWARE infrastructure in early 2017, the convention center wanted to up the ante for CES 2018,” Merlino said. “These huge overhead displays demand attendees’ attention and provide exhibitors and show organizers an unforgettable means to advertise and share information, while our innovative AWARE platform seamlessly integrates them into the same content and monitoring system currently managing the 15 displays that are located throughout the convention center. The expansion capabilities of AWARE will allow LVCC to add and then control and monitor unlimited LCD and NanoLumens LED displays, guaranteeing smooth performance, industry leadership, and adaptability to new trends for years to come.

Even though the plans for this large project were finalized just a month before CES 2018, installation was completed five days ahead of schedule, allowing LVCC to test operation before the consumer electronics show. The new NanoLumens displays were custom designed and built to fit and maximize use of the available space, utilizing a 4mm pixel-pitch design, offering 1,700 nits of brightness, and weighing less than 3,220 pounds.

According to Jady West, Hospitality Network senior director of sales, the NanoLumens LED displays were chosen to provide an ultra-modern, seamless digital display, in contrast to paneled video walls with bezels. Additionally, the AWARE platform will allow Cox Business and Hospitality Network to scale up for future installations and even provide a simplified means of managing multiple locations if required.

"The speed, flexibility, and reliability of the NanoLumens AWARE platform play a major role in helping us to update and manage a network of displays that grows in number and complexity with each passing year," West said. "AWARE provides us with an unparalleled advantage in a digital world. It combines display diagnostics and support functions with content management services and a robust audience measurement platform. We now have a complete view into every part of our network."