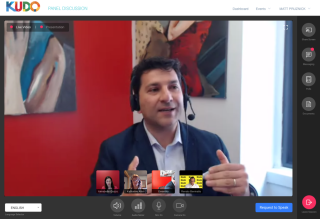 Global communication is taking another leap forward with the launch of KUDO 2.0—a multilingual simultaneous interpretation platform for online meetings. Designed to complement enterprises’ existing videoconferencing hardware and systems, KUDO bridges language gaps and enables businesses to reach partners and clients across the world in their native tongue.

In a panel discussion on May 8 held using the new platform, company executives, interpreters, and adopters of the solution discussed its benefits while simultaneously demonstrating its capabilities, alternating between speaking English, French, Spanish, and Portuguese. For attendees, the output language remained consistent throughout—in a choice of any of the speakers’ languages, plus Japanese and Italian—provided smoothly by a network of six KUDO interpreters.

“KUDO is born to address very specific needs,” said Fardad Zabetian, the company’s founder and CEO. “There’s still a huge value for people to meet in person, and network and handshake. But we also recognize how many meetings are going into the cloud, how many of the conversations are based in video collaboration.

“There are so many videoconferencing tools—Cisco WebEx, GoToMeeting—but there’s the missing layer of language for all of those platforms. And we at KUDO believe that language is the main ingredient of communication. As someone once said, ‘When you speak a foreign language, you speak what you can; when you speak your own language, you say what you want and what you mean.’”

Moderated by Renato Beninatto, CEO of market research firm Nimdzi Insights, the panel included prominent interpreters—Katherine Allen, co-president of InterpretAmerica, and Ewandro Magalhaes, former chief interpreter for the United Nations and current VP of communications for KUDO. It also featured an early adopter of the platform, Annabelle Gazzo, who is director of marketing at Media Vision.

According to Gazzo, KUDO is a complementary tool that can add value to existing communications infrastructure, for example, for large events, for which the first iteration of the platform was designed. “This product isn’t aiming to replace hardware that’s onsite in convention centers; it’s presenting as a supplement, and to extend interpretation to smaller, secondary meetings that might not have had interpretation.”

With version 2.0, the company’s focus has expanded to corporate clients. The service is sold two ways, according to Magalhaes: subscription based—for companies that regularly communicate across languages, with a monthly, fixed hourly rate—and on demand—suited for meeting planners with a daily, per-user rate.

And, the platform is made to be as accessible as possible. According to Zabetian, it works with off-the-shelf hardware and doesn’t require any downloads—users simply join through their computer or Android or iOS device.

Other features of KUDO 2.0 demonstrated during the presentation include its new polling feature. Organizers asked attendees select in which global region they were located; after voting closed, attendees could then view the results and even arrange the data in different graphical charts. Another feature is a simple toggle that switches between video of the current speaker and slideshow content being presented.

“We are in the business to grow the size of the multilingual meeting space as a whole,” Zabetian said. “We are basically creating a subcategory, a new market that is bridging traditional language interpretation and web conferencing. This is not a replacement for what’s been working for most of the established interpretation market; we are bringing a tool for businesses to be able to communicate and get into new opportunities at very minimal cost and investment.”