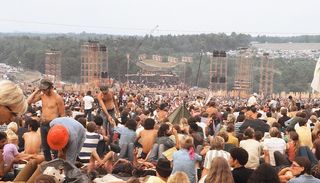 The escalation of large-scale rock touring in the ’60s challenged tour sound production companies to provide superior sound coverage and intelligibility for unprecedented numbers of fans at massive, and oftentimes unorthodox, locations, like the Woodstock Music and Art Fair. JBL met this challenge by providing a variety of loudspeakers and components that could be assembled and deployed as proprietary speaker systems.

The brand now known as JBL dates back to 1946, but the company’s foundation began taking shape years earlier during founder James B. Lansing’s pioneering work in cinema sound. These days, as part of the Harman family, JBL benefits from developing products synergistically with other Harman brands—leveraging amplifier technology from Crown, signal processing from dbx, and more to create complete pro-audio solutions. As for the future, JBL aims to continue pushing the understanding of the laws of physics to provide better coverage patterns, sound quality, and technologies for an all-encompassing audio experience.

“We’ve worked hard to earn our reputation for the best quality audio in the market and are working even harder to improve on it,” said Bryan Bradley, senior vice president and GM, Entertainment Division, Harman Professional Solutions. “For example, JBL continues being one of the only brands that manufactures our own parts. We don’t just buy a transducer off the shelf, we manufacture it to the perfect spec.