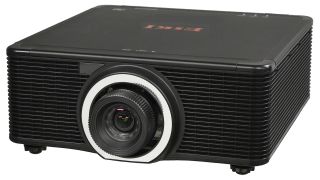 The What: Eiki International has announced two new WUXGA large class 1-chip DLP Laser Projectors: the EK-818U and the EK-812U.

The What Else: The EK-818U and the EK-812U Laser Projectors deliver vivid imagery thanks to their support for WUXGA (1920x1200) resolution that supports 4K content and HDR. The EK-818U provides 9,500 lumens brightness and a 100,000:1 contrast ratio while the EK-812U offers 8,200 lumens and a 100,000:1 contrast ratio. Additionally, both models carry an IP5X Dust Ingress Test rating and include a 20,000 hour laser light source—resulting in long-term reliability in cost-effective packages.

Both projectors offer a wealth of connectivity options that provide greater flexibility in terms of both signal access and control. For access on a LAN, these systems provide RJ-45 connectors for both HDBaseT and Ethernet. The projectors also provide support for RS-232C (9-Pin D-Sub) control as well as an input for a dedicated wired IR (infrared) remote. Equally notable, the projectors include a USB Type A connector—enabling them to operate over the network using a Wi-Fi dongle. Additional connectivity for the EK-818U and EK-812U includes both HDMI input and output, 3G-SDI (on a BNC connector), a DVI-D input connector, and VGA I/O.

The Eiki EK-818U and the EK-812U offer a wide range of flexible installation options including 360-degree free orientation (vertically and horizontally), Geometric Correction capabilities, Portrait Orientation, and the availability of six optional lenses.

“The EK-818U is the next generation of our very popular EK-815U and I am pleased to report that we have improved the technology considerably while being able to maintain the same cost to our customers,” said John Schippers, CEO at Eiki International. “Similarly, the new EK-812U—being the next generation of the EK-625U—benefits from a similar set of improvements. I firmly believe our customers will find much to like with these new products.”

The Bottom Line: With support for 4K resolution and HDR, these two new projectors are well suited for digital signage, auditoriums, large conference rooms, theaters, houses of worship, and other large venue applications.