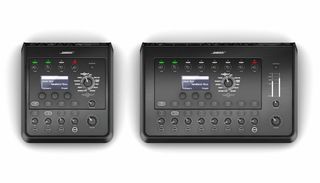 The What Else: The eight-channel T8S ToneMatch mixer is designed to be intuitive to operate, with illuminated, stage-friendly tactile controls, an easy-to-read display, and scene recall. ToneMatch processing presets with a DSP engine (including studio-quality effects and Bose zEQ equalization, which redefines low, mid and high ranges for each ToneMatch preset). When used with Bose L1 and F1 systems, the T8S provides full end-to-end tonal optimization.

The four-channel T4S offers most of the same features as the T8S, but also includes dual ToneMatch links—designed to send digital audio to L1 Model 1S/II systems while receiving power on the same provided ToneMatch cable (note: when not used with an L1 system, the T4S can also be optionally powered by an accessory ToneMatch power supply). The final difference between the mixers is the inclusion of an output meter on the T8S (not included on the T4S).

“The T4S and T8S are designed to make performing easier for musicians and DJs,” said Craig Jackson, category line manager for Bose Professional. “Modern digital mixers can often be difficult to use. We focused on making our new mixers sound great and offer seamless live control. They feature powerful audio processing and a simple user interface that allows our customers to get up and running quickly so they can focus on their music.”

The Bottom Line: Both models feature rugged enclosures with a protective, magnetically coupled cover to protect controls and connectors. A chassis-bottom insert allows the use of standard mounting accessories to keep the mixers in reach during performances. The T8S and T4S are now available with U.S. MSRPs of $899 and $599, respectively.