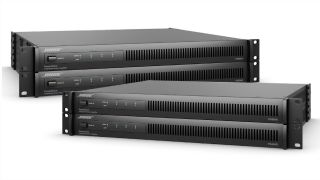 The What: Bose Professional has expanded its line of PowerShare adaptable power amplifiers with two new models: the Dante-integrated PS404D and PS604D, joining the recently introduced models with AmpLink connectivity, the PS404A and PS604A.

The What Else: The new PS404D (400 watts divisible into four channels) and PS604D (600 watts divisible into four channels) PowerShare amplifiers feature integrated Dante audio networking for increased connectivity flexibility, while giving installers the freedom to place the amplifier away from the source. The recently introduced PS404A and PS604A offer AmpLink connectivity. AmpLink is Bose Pro’s in-rack Cat-5/6 digital audio distribution solution and is supported in their latest DSP units. The Dante models allow mixed inputs using either digital or onboard analog audio connections.

“The notion of a multichannel amplifier that breaks free from the fixed-power-per-channel architecture has been well received,” said Bose amplifier product line manager Ashraf Elghamrawi. “Integrators told us that ‘power-sharing’ makes their projects more responsive, and they asked for digital input options for even more flexibility.” Answering the call, Bose Professional has added these four new digital models.

The Bottom Line: With the release of PowerShare adaptable power amplifiers in 2016, Bose Professional armed installers with a powerful new advantage—the freedom to put amplifier power where it’s needed and waste less of an amplifier’s drive potential where it’s not.