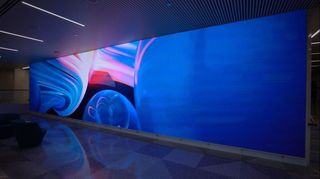 The two 42’W X 10’H 4mm pixel pitch displays measure a total of 840 square-feet and dominate the building’s main entrance at the south lobby, according to Joe Hynes, Senior VP of Project Management at JLL, the center’s property management firm.

“During renovation planning we worked with architects to include cutting-edge features that would be fun for tenants, prospective tenants and guests,” Hynes said. “One of our ideas was a massive digital canvas, and NanoLumens was the obvious choice to make this idea a reality. As people pass by and enter the building their sight line is dominated by the astounding visuals playing on the NanoLumens displays. In fact, they have to walk right between the two displays in order to enter the main hallway, so it’s almost as if they are walking directly into the digital content itself.”

The installation’s current content shows five three-minute videos on a constant loop. All content was created by the creative pros at Pixelfire, a leading digital content producer based in the state of Washington. One video shows the view from a train traversing Chicago as it passes by the lakefront, the Chicago Loop, the city’s elevated tracks and some of its famous architecture. Acting as a single, ultra-wide display, the train then crosses over the hallway onto the adjacent screen, demanding tenants and guests to stop and watch as the entire wall creates a digital window into the city’s history and highlights.

Another piece of creative content portrays a digital ballerina rising out of a water fountain that was created using motion capture of a live ballerina. A third visualization presents a mirror image on both displays of a picture in frames, which gradually change and move in different patterns on each display, which again captivates the lobby’s audience as they wait to see what happens next. Hynes says they plan to update the content quarterly.

“This is a visual experience unlike anything else in Chicago,” Hynes said. “It’s so enthralling that people, including tenants, are constantly stopping to take selfies and videos and sharing them on social media. The same thing happens at lunch hour as visitors pass by the displays on their way to the building’s restaurant section.”

Sensory Technologies, the Chicago-area AV integrator that installed the displays, cites several NanoLumens characteristics that made it the right choice for this project.

“From an installation perspective, the learning curve for NanoLumens products is almost nonexistent,” said Cariane Kafka, Project Manager at Sensory Technologies. “The crew that worked on this project was new to NanoLumens, and they were able to begin work the same day they were introduced to the product. It’s that simple. We’ve worked with NanoLumens before in Chicago, and we know that NanoLumens is the go-to solutions provider that minimizes complications on large projects. It’s a lightweight technology, so it doesn’t require much in terms of support infrastructure, and since it is composed of small Nixels that make up a larger display, people can work independently and get the job done quicker.”

“These two displays, making up a total of 840 square feet of digital real estate, were installed in just 11 days, almost a full week ahead of schedule," added Kafka. "It’s also much easier on the content delivery side since there are only two displays, versus the complicated multi-display system that would be required for a projection or multi-panel installation.”

JLL also wanted to ensure they could maintain the display themselves for long-term performance and immediate troubleshooting, so they purchased extra Nixels and had employees learn how to install them. If any individual pixel or Nixel has an issue, it can be swapped out for a new one in minutes. Not weeks or days, minutes. No other display technology offers such simple and rapid maintenance.

The industry-leading six-year warranty also factored into the purchase decision, as it gives JLL a guarantee that even if one pixel fails, NanoLumens will replace it. That is another unmatched standard that NanoLumens can offer thanks to its reliable technology.