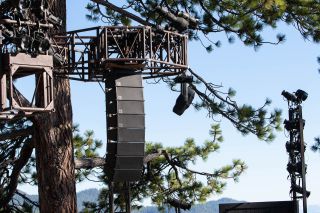 With a stunning view of Lake Tahoe as its backdrop, Lake Tahoe Shakespeare Festival is nestled in a dune at Sand Harbor, Lake Tahoe Nevada State Park. This year the Festival transformed their sound system with the help of Audio Logic Systems (ALS) of Minneapolis, MN.

Lake Tahoe Shakespeare Festival operates in the summer months and beginning in early June, the crew arrives to assemble the entire venue including the seating, towers, rigging, lighting, and speaker systems. At the end of the season in September, the entire venue is stored for the winter leaving only a bare stage deck. Below the deck is permanent infrastructure including the dressing rooms, bathrooms, a small amount of storage, and a room for electrical service and amplifier racks. The Festival season consists of two shows in repertory: one a musical, the other a Shakespeare play, as well as weekly live musical concerts. This year’s season included The Taming of the Shrew and Million Dollar Quartet.

“An outdoor theater space, the festival area is fully open to the elements where the audience attends as much to socialize as they do to watch the performance,” said John Markiewicz, owner/CMO, Audio Logic Systems.

The resident designer for the Festival is David Gotwald, and along with sound supervisor Brian Chismar, they selected d&b as the system of choice. “We went to John at ALS because we were interested in an all d&b system. Brian and I had specified a d&b rig for our sister venue, the Idaho Shakespeare Festival, two years ago, and we were thrilled with the response from the patrons as well as our artists. So we knew we couldn’t go wrong with a d&b system for Tahoe.” Gotwald goes on to say that “the transparency and linear response of the cabinets are a huge selling point for me as a designer. Since our venue is completely exposed to the elements, I wanted weather resistant cabinets, which could withstand the blistering sun as well as constant exposure to sand dust. The fact that d&b offers this option was a plus for us. It was a pleasure designing this system with John and the result of our tuning process was extremely successful. A constant complaint we heard before this install was about inconsistent coverage, ‘too loud up front and can’t hear in the back’. With the new line arrays and the point source delay and fill cabinets, we have really solved this problem.”

From a design perspective, the venue is a very complicated and asymmetrical space built on a sand dune peninsula. According to Markiewicz, “If you were to stand in the back seating position and line yourself up with the center of the stage you would be sitting house left, third seat from the extreme side. The first row is three feet from the stage and the last row ends 150 feet to the rear of the dune with 36 feet of elevation. An additional section of seats extends far to the side of the venue, adding to the asymmetrical issues of coverage.... With many measurements, I was able to build an accurate ArrayCalc file for the venue. Most difficult were the vertical heights and getting an absolute trim height estimated for the new array using the existing vertical truss towers.”

The main PA consists of two left and right arrays of 8 x Y12 each. Because of the trim height limitations as well as the 36' rise in elevation, Markiewicz was unable to cover the entire depth of the seating area with this hang alone. To cover the rear seating area, he implemented a delay system from lighting towers halfway back. “This was tricky since the seating is not symmetrical and the two towers are at different heights. To provide coverage for the first few rows and to bring the image forward and down to the stage, we provided two Y10P loudspeakers mounted at the left and right proscenium location. The front fills are six 4S loudspeakers mounted to the stage lip with low frequency handled by the B22-SUBs. Additionally, the four 4S downstage foldback speakers and two 8S can be implemented as monitors or effects speakers as needed. The Yamaha CL console feeds the d&b DS10 Dante bridge.” To complete the audio system for the Festival, ALS also supply Audio-Technica mics and 2 Yamaha Ri8-D input boxes.

While the design itself proved challenging, Markiewicz said that a major installation difficulty was sand everywhere. “Trenching in sand and running new conduit is difficult. Add to that working outdoors for weeks and squirrels eating everything you set down...”

“I’ll start with how thrilled I was to be working with a full d&b rig,” states Bart Fasbender, sound designer, Million Dollar Quartet. “I arrived at the venue after the system had already been installed and tuned to measurements. In walking around the house, and after consulting with John Markiewicz and David Gotwald we made a few EQ and timing changes to taste but generally we stayed pretty close to what the numbers and meters predicted we would need. That first session was mostly about getting the system aligned and neutral. After that was locked, I made tweaks to make the show sound how I wanted it. It was just a pleasure having that reliably blank canvas to work with. As was mentioned, the seating area was just nuts in terms of there being no symmetry; John did an amazing job with David to cover all the idiosyncrasies of the house. The d&b gear was so accurate and predictable that it was easy to get the results we were looking for from the system and for me to get the sound of the show I wanted. I couldn’t have been happier, and I’m looking forward to getting to the next all d&b venue in a few weeks!”