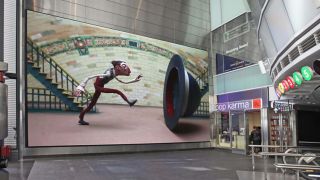 These days, most of our waking lives involve steady interaction with technological screens and digital media. In an age of such vast and constant visual stimuli, the Metropolitan Transportation Authority’s (MTA) Arts & Design program ensures that art is among that digital landscape. Since 1985, MTA Arts & Design (formerly Arts for Transit & Urban Design) has been shepherding the indelible legacy of design excellence put forth by the founders of the New York City subway system through temporary and permanent public art commissions across the 5,000 square miles of MTA transit system lines. As the MTA embraces 21st century technology and amenities, so must the art that enhances our 8.7 million riders’ daily commutes. With a flourishing, award-winning digital art program, MTA Arts & Design does just that.

MTA Arts & Design’s digital art program got off to an exciting start. In November 2014, the MTA opened Fulton Center, a new transportation hub in lower Manhattan that connects eleven subway lines as well as PATH trains at the World Trade Center complex. Crowned with a monumental artwork Sky Reflector-Net by James Carpenter Design Associates, Grimshaw Architects, and Arup, the Fulton Center houses nearly 66,000-square-feet of retail space and the MTA’s largest digital media network to date. “Fulton Center represents the future of the MTA, so we looked to technology that also would move Arts & Design into the future. A digital arts program gives us the opportunity to offer temporary art, to work with digital artists and to produce art that engages our customers in a more immediate way. Large-scale electronic displays like the one in Fulton Center open up a world of possibility for new media artists to connect with our customers,” noted Sandra Bloodworth, director of MTA Arts & Design.

To celebrate the MTA’s leap into the future, MTA Arts & Design launched its digital art program with an inaugural artwork titled New York Minute, by new media artist Gabriel Barcia-Colombo. Premiered at Fulton Center on its opening day (November 10, 2014), New York Minute was a large-scale 52-channel video installation, which ran on 52 digital signage screens ranging from 55-inch LCD screens to LED walls measuring 31.5 feet by 18.9 feet. The installation featured portraits of everyday New Yorkers doing everyday things in super slow motion and draws attention to the things that are missed when New Yorkers rush around the city in a frantic pace, by altering tempo and timing. Utilizing this slower, almost meditative pace through digital media, Gabriel Barcia-Colombo elevated the mundane to the sublime for commuters meandering through the Fulton Center. Amy Hausmann, deputy director of MTA Arts & Design, reflected that “Gabe’s work reminds us that we’re not alone and that at any given moment in New York, there’s always something else going on.”

In December 2015, MTA Arts & Design unveiled its next digital art commission, The Blowing Bowler by animator and illustrator Chris Sickels, in line with the winter season. This stop-motion animated short film airs simultaneously for two minutes at the top of each hour at Fulton Center, with promotional teasers aired at 30 subway stations via MTA’s On the Go Travel Station kiosks. “We love the idea that his work is handmade. This idea of creating these really meticulous sets and figures and models, and we love seeing that work in juxtaposition to this really modern, new architectural public space here in lower Manhattan,” said Hausmann. Sickels, the creative force at the helm of Red Nose Studio, created a dioramic model from wood, clay, fabric, wire, cardboard and found objects, then painstakingly filmed each motion as a frame of the film. In a video interview about the work, Sickels said that he wanted “to create a series of animations that cover traveling across the history of the subway car and the evolution of the design of the cars…and to make it as magical as possible.” The film features comical cat-and-mouse antics in reference to the round-the-clock operations of the New York City Transit system and a ridership that is always on the move.

Speaking of the technical challenges, Yaling Chen, manager for the Digital Art Program, stated that “being able to realize an idea or a story into digital form for the 52 digital displays in various scales throughout the Fulton Center is no small task. We are grateful for the hard work and commitments from the artists and the support team, and touched to see the attention given to these artworks from our customers passing through the space.” To secure such precious airspace and weave these stunning new media artworks seamlessly into an ongoing stream of advertisements, MTA Arts & Design developed a partnership with Westfield Corporation, Fulton Center’s property managing firm; ANC Sports; MTA’s Marketing & Creative Services and MTA’s Multimedia Production Team.

If recognition and external validation is any indication, MTA Arts & Design’s digital art program is on the right path. Both New York Minute and The Blowing Bowler have received awards from leaders in the field. New York Minute was awarded the Apex Award Gold Medal in Transportation at the 2016 Digital Signage Expo, and both commissions have been selected as “Best Public Art” consecutively in 2015 and 2016 by Americans for the Arts’ Public Art Network’s (PAN) Year in Review. As screen-based and contemporary new media art continue to expand, this budding component of MTA Arts & Design’s programmatic portfolio is certain to keep delighting New York City transit riders.

As a member of the Digital Signage Federation (DSF), New York Transit Authority MTA Arts & Design authors Amy Hausmann and Yeling Chen will be panelists on the DSF’s August “Hangout” discussion on this topic, on Thursday, August 18 at 2pm EDT. More information on this and other DSF events can be found on the DSF website. Both DSF members and non-members may join this or any of the DSF’s scheduled Hangout discussions for free – but registration is required and can be accessed on the DSF website at www.digitalsignagefederation.org/hangouts