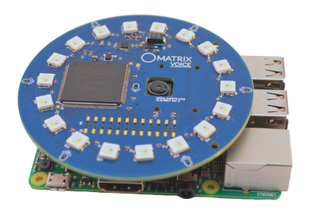 AdMobilize will introduce its MATRIX Voice dev board to the digital signage industry at DSE 2018 in booth 2369 at the Las Vegas Convention Center.

“Put simply, the company that introduced AI-powered audience analytics to the digital signage industry is now bringing voice recognition functionality to both manufacturers and systems integrators alike through its MATRIX product line,” said AdMobilize co-founder and CEO Rodolfo Saccoman. “We believe that voice engagement technologies will make digital signage a more compelling and sticky communications solution for an even broader range of vertical markets. The combination of audience analytics and voice recognition functionality truly represents the next chapter in this constantly evolving industry and AdMobilize is at the forefront of making this chapter a reality.”

Available for $55.00, MATRIX Voice will integrate with any voice recognition service (Amazon Alexa, Google Assistant, or any other third-party service) at any time. “MATRIX Voice puts the power of flexibility directly in the hands of the manufacturer and systems integrator, freeing them from being confined to any one of the currently available voice services,” Saccoman said. “This enables plug-and-play custom voice solutions to go mainstream.”

MATRIX Voice is also designed with security concerns in mind. For retailers who do not want Amazon listening to, recording, and storing all store information on its cloud, MATRIX Voice provides the capability to process voice recognition at the edge and not strictly in the cloud.

MATRIX Voice can be run on a Raspberry Pi or standalone, thanks to an optional module (ESP32) that equips it with a micro-controller as well as Wi-Fi and Bluetooth connectivity. MATRIX Voice has an eight-microphone array, a 3.5mm audio output jack, two speaker outputs, a 3A audio amplifier, 24 expansion GPIO ports, 64MB of RAM, 64MB of Flash, and the second-tier Spartan 6 FPGA that allows manufacturers and integrators to customize the functions of the GPIO pins as well as implement one’s own audio and voice algorithms.

“Let’s say you have 50 digital screen directories already installed within a mall,” Saccoman explained. “With MATRIX Voice you can now place it within the top or bottom of the directory (depending on space and optimal audio clarity for the microphones) and then use a third-party voice recognition service to create custom wake words and responses to enable the shopper to ask, ‘Directory, where is Macy’s?’ and have the directory respond with the route to Macy's from the shopper’s location. All sorts of voice activated cues and information can now be programmed into a digital signage network, opening up the door to a whole new series of applications.”

According to the company, AdMobilize’s aim is to bridge the gap between the digital revolution and disruptive computer vision analytics, infusing machine learning into formerly unintelligent displays.