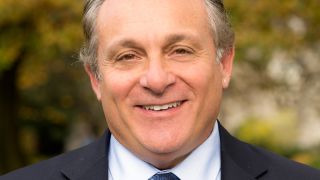 To be a successful academic leader, a combination of vision, appropriate experience, and strong academic background is needed. Dr. Dikran Kassabian, known among his staff as “Deke,” encompasses these attributes. When he arrived at West Chester University (WCU), he had had earned a doctorate in higher education management and had gained experience at two large universities. He also has degrees in mathematics and electrical engineering. Currently, he reports to the president of the university and has overall responsibility for the IT and AV departments. As soon as we began to talk, he gave me his vision for the future of computing and AV technology at WCU.

WCU is in a small eastern Pennsylvania town, not far from Philadelphia. It has approximately 17,000 students, offers four doctoral degrees, and has a rapidly expanding distance education program. WCU is the largest university in the Pennsylvania State System of Higher Education (PASSHE).

AV Technology: In your unique role of supervising both AV and IT, what challenges have you faced in getting the groups to work together?

Dr. Dikran Kassabian: We have the advantage that our IT folks and AV folks have been working together for many years. Some have moved between the groups. They understand that they need to work together. For example, the AV folks know that the IT group needs to put the proper infrastructure in place before AV installations begin. The teams understand each other’s requirements. They know that it’s a bad idea to underspec these requirements and they know to expect heavy utilization of the networks.

AV Technology: How is AV/IT convergence playing out in your facility?

DK: We do it naturally. Instead of these groups being isolated, they’ll have coffee together and discuss their needs. They often do cross training. We work hard to make sure that each group makes sure that they are aware of the interesting things going on in the other group. For example, we have regular divisional meetings and in one, we asked some of the AV folks to discuss what new technologies were used in the new Business and Public Management Center (BPMC). In this way, programmers working on the student information systems, networking staff working on configuring routers, and those working on budgeting will hear the interesting things we did to put active learning spaces (collaboration spaces) in the BPMC.

AV Technology: How much is AV playing a role in your professional life?

DK: Two things come to mind. First, the people in the IT organization, the professional video staff, are the ones that have the most contact with the executives who run the university, the president, and the board of trustees. They need to make the individuals look good on camera. The president trusts the video staff and has an excellent working relationship with them. In a recent task where the president was to make a Skype call, the staff arrived early, tested the link, and assured that the lighting was appropriate. They stayed to make sure the call was successful. We also use video chat and screen sharing when we interact with consultants and vendors. Video calls are increasingly replacing audio calls.

AV Technology: What is your IoT strategy?

DK: I see mobile wireless and IoT to be separate topics. Mobile wireless is accommodating people using handheld devices. To meet this need, we have a dense deployment of skinny access points with a controller architecture. The control function is in the data center. So, we can scale and modify the coverage. We use Aruba access points. They have good penetration in universities. We are approaching three devices per user. I have a smartphone, laptop, and tablet. When I leave the office I take two of them with me. So, I’m also contributing to the increase in number of devices per person.

However, I see IoT as purpose-built devices with a TCP/IP stack—door entry devices, temperature sensors, and such devices.

AV Technology: Do such devices authenticate to the network? Do the people installing such devices talk to you or make you aware of the fact?

DK: Yes. In nearly all cases, we are aware of such installations. I think there is a lot of maturing that will take place in the development of these devices. Along with that, the vendors of these devices and the people installing them will begin to realize they need to work with IT on the security-related issues. At the same time, it is my opinion that they should be separated using a VLAN. They don’t need to be in the user space.

AV Technology: Where are technology manufacturers getting it wrong or missing opportunities?

DK: I think the area that comes to mind is security. For example, home devices can get along with pre-shared key authentication. But it’s different in an enterprise. The identity and access folks don’t want these non-human devices to have characteristics that go in a database that has identifiers of humans. These devices need to do certificate-based authentication. This may be a level of sophistication that these devices may not have. This will add cost and hurt them relative to competitors. However, as I mentioned earlier, this space is maturing and I think, through time, these needs will be added to IoT devices.

AV Technology: Do you face any difficulties meeting users’ expectations?

DK: Probably the most common situation is where users can conceive of what they want to achieve but they haven’t the budget to reach this goal. I think people would like to be able to do professional-level video capture at their desks and in their classrooms. We are increasingly installing video capture capability. However, the good-quality cameras are still not cheap. So, sometimes the high-function units are only in certain classrooms. Different parts of the university will push the limits in different ways. That’s what makes it fun.

AV Technology: What’s your philosophy about IT and AV standards?

DK: IT standards are centralized here at West Chester. I’ve worked at universities where they weren’t and it adds a layer of complexity. Here we can focus on meeting users’ functional needs rather than spending time on technology choices.

DK: As I mentioned, we just finished BPMC. We will be breaking ground on a new commons building (this will contain both vending and food for students and some areas to serve science faculty). In the commons we will be working with facilities to determine the locations of power, access points, and other IT and AV needs. We will work with the architects and engineers at the point at which design drawings are created.

We have a distance education group. They work with taking the faculty goals and providing remote delivery. Sometimes there will be students who will never come to campus. In the past we have used things like Adobe Connect and some of the Blackboard tools. But, in the future, the PASSHE system will be using Zoom. It will be used for both collaboration spaces and for one-to-many communications of the faculty to the students. We also have Skype for Business for communications. We have telephones and the day may come when video collaboration tools replace the phones. But, right now, there are many people who are comfortable with the phone and will want to continue using them for a long time.