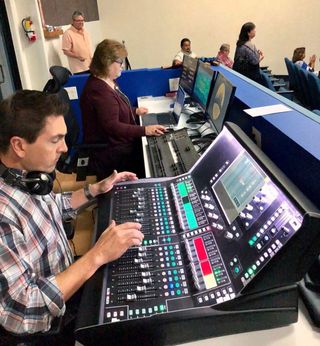 It used to be that audio requirements in the house of worship environment were relatively minimal—unless it was a megachurch, the goal was to raise enough funds to install a P.A. that would more or less enable congregants to hear their pastor. But the decreasing cost of technology has rendered more sophisticated systems accessible to budget-conscious congregations, and church techs and volunteers have grown increasingly skilled at running sound. The result: the average house of worship is demanding more from their AV integration partner than they have in the past.

“[Churches] are no longer intimidated by tech—they want more of it, and they want flexibility and ease of use,” said David Price, president of DP Design, an AV design and integration firm based in Milwaukee, WI. “The more you can do to make that happen, the happier they are.”

For those serving houses of worship, one of the most significant developments is an increasing demand for networked audio. “Everything is becoming much more reliant on computer networks—we’ve got audio over networks right now in a variety of different protocols,” said Ben Boeshans, CTS-D, Idibri. He notes that passing audio over the network has simplified cable and wiring, but it means that AV integrators now require networking skills.

Boeshans’ colleague, Casey Sherred, LEED AP at Idibri, pointed out that audio networking also demands a different approach to troubleshooting. “It’s not just does the cable continuity work? It’s do I have the right protocols and switch configurations for data traffic to pass through the appropriate switches to the right locations?” he explained. “It’s a different kind of troubleshooting skill that’s required.”

The demand for networked audio is especially apparent at multisite churches with campuses spread across a region, as well as multivenue facilities, which house several worship spaces on the same property. In both cases, it’s common for each “remote” location to feature its own worship style and praise team, but all will receive the same sermon—usually delivered by the lead pastor who is preaching in the main sanctuary. “You’ve got to be able to pipe audio [and video] anywhere,” Price said. “That used to be very far-fetched—it was something that only North Point and other really large churches could do.” He adds that his firm has installed Dante audio networks in churches with as few as 200 members thanks to the fact that even modestly priced audio consoles now come equipped with Dante cards.

[More on Houses of Worship]

A common issue for churches is related to acoustics: traditional congregations are often housed in historic buildings with little in the way of acoustical treatment, and more modern houses of worship lease or purchase property that was not built with religious services in mind (such as former retail outlets, or even warehouses). Scott Carman, president and COO at Velocity Productions, noted that manufacturers are addressing this architectural shortcoming with P.A. systems that help integrators direct sound more accurately. “When you can’t install a ton of acoustical treatment, or you don’t want to because you’re trying to keep a space looking nice, these systems can be adjusted to keep sound off of the walls and in the assembly space,” he said. The ability to control where sound lands helps firms like Velocity ensure that every congregant, no matter where they’re seated, can hear what’s taking place on the platform.

P.A. technology has also made tuning a system much less time-consuming, according to Price. “You could spend an entire day tuning a really complicated P.A., and it’s gotten to the point where the prediction software is so accurate and the processing capabilities are so powerful that there is relatively minimal to no latency, which was always the big issue before,” he said, adding that the tuning process now is less about tuning than it is about verifying in practice what the software already laid out in theory. “The rate at which you can deploy a P.A. today is shockingly faster, shockingly more accurate, and the results are 10 times better, [even if] you might still have to adjust for weird idiosyncrasies in the room.”

Price, whose company focuses on the house of worship market, said that his organization is increasing its remote monitoring and management services to churches, which has streamlined troubleshooting and prevented problems before they compromise a Sunday service. At the same time, he observes that his church customers are growing more autonomous in managing their technology. “It’s not like it used to be, where if there was a problem, we got a phone call on Monday and we’d come out and do a site visit. A lot of times, our clients now know what the issue is and they call us just to verify what the solution is,” he said. “They may need to buy some parts and pieces, but half the time they’re doing maintenance on their own now, if they have a competent tech director.”

[Selling to Houses of Worship]

Does this make Price nervous? After all, if a church takes a DIY approach to maintenance, isn’t integration the next natural step? For Price, there is that danger, but there still remain opportunities in the house of worship market—as long as the AV firms working in this space remain ahead of the curve.

“It’s getting to the point where audio is no longer limited to the wizards who hold the secrets of this indefinable thing—it’s kind of losing its mystery,” he said. Still, it’s difficult for most church tech directors to stay on top of all of the current trends, or to remain fully informed on everything that’s available in the marketplace—an exercise that savvy AV integrators consider an important part of doing business. “If you stay on the cutting edge, there’s still a lot of mystery behind that. If you understand the algorithms, if you understand the advanced measurement methods, if you understand the software that’s doing these advanced calculations—and all of the different options that are available to you and how that affects the performance of the P.A.—and what’s best for the client, it’ll keep you in the game.”

Experiential Audio: Not Just for Retail

It’s become commonplace for shopping malls and amusement parks to launch a visitor’s experience the minute they park their car: today’s parking lots are outfitted with loudspeakers playing music and messaging designed to set the tone for the next several hours. Scott Carman, president and COO, Velocity Productions, observes that churches are beginning to explore how they can apply this concept to the experience they’re providing for congregants.

“They’re trying to engage people beyond the hour and a half they’re in the service,” Carman explained. “So it’s not only about the main sanctuary, it’s how are we supporting audio elsewhere for experience? Sometimes it’s just an extension of the message into other venues, and sometimes it’s atmospheric, so when somebody leaves the worship center, there is continuity to allow people to take whatever they felt—that feeling of the message and the worship. The experience from the parking lot to the sanctuary and back to the parking lot is becoming a part of the conversation, and most of that is related to audio.”