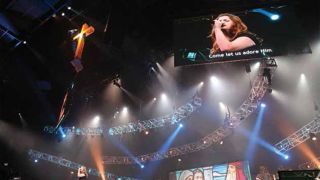 If you play your cards right, churches can be among your most loyal customers. Many of them are in continual expansion mode, and if they feel like you take good care of them, you stand to be their go-to firm whenever they’re upgrading their facilities or building new ones. But while houses of worship may seem like a good bet, not all AV companies are cut out to work with them. For one, if you’re not into church, chances are that churches won’t be into you.

Memo to AV companies: if you’re not into church, chances are churches won’t be into you.

“A lot of people want a quick decision: I want to sit down with you, I want to tell you the plan, I want to tell you how many millions of dollars it’s going to cost, and I need a deposit,” said Andrew Stone, production manager at Church on the Move in Tulsa, OK. “And a lot of [churches] are like, ‘Whoa! We haven’t even been to dinner. What’s your wife’s name? Do you attend church? Do you have children? Do they attend a kid’s classroom like we’re trying to build?’ Those are important topics.” He said that no matter who is controlling a church’s finances—be it a committee, an executive pastor, or a senior pastor—if an AV firm won’t take the time to earn trust, it’s unlikely they’ll strike a deal. “There is a high level of trust that has to be earned in those situations, and that is a painstaking, frustrating, time-consuming situation for a contractor. It just is.”

“Churches know instantly if you’re a company that lives and breathes church, and [if] you’re involved in your own church, and [if] you believe in ministry—they know right away, they sense that,” said Doug Hood, president of AV design and integration firm Custom Sound Designs (CSD Group). Hood said that he leads worship at his own church, and that his employees are all involved, at some level, in their own churches as well. “If you’re involved in your church and you’ve got a real heart for helping them, and you’re sincere in that, then it’s great. But it’s not the type of business where you, as an AV contractor, can wake up one morning and say, ‘Hey, these churches are buying a lot of stuff—let’s get in on the action.’ It’s quite a bit deeper than that.”

At CSD, Hood and his team document what is known internally as a New Church Profile, which tackles questions such as: What is this church all about? How does it communicate now? How does its leadership envision its church communicating in the next five to 10 years? Are all communications happening on just one campus, or are there multiple sites to consider? Does this church stream its services to a worldwide audience? “All of those answers then directly impact the type of technologies that we need to design for them,” Hood said.

To gather this information, the CSD team is usually in contact with various members of the church. From senior pastors and worship leaders, the AV firm can gain a high-level perspective on the church’s vision, while conversations with the people who are actually going to be operating the AV technology can help systems designers understand, for example, how tech-savvy the end users are (which, in turn, influences things like system programming). Finally, to hammer out the nitty-gritty details of what specific equipment will go into the facility, CSD generally works with church tech directors.

The immersive worship experience: treating the whole room as a canvas, not just the stage.

David Roche, project manager at media technology and integration company Diversified, said that his firm follows an intensive discovery process with churches before sitting down at the drawing board. He also noted that compared to those in other markets, church projects tend to have long lead times that sometimes last for years. “We very rarely have a project where somebody calls up and says, ‘Hey, we want to do new cameras,’ and we design it, spec it, go through all the processes, and have it installed in three or four months—that just doesn’t happen,” he said.

One of the reasons for this is because many churches are ruled by committee, which means that AV firms can find themselves struggling to determine who actually has the authority to give a project the green light. Roche’s colleague Tom Larrison, account executive at Diversified, relayed that his first contact at most churches is the media minister or tech director, but these individuals don’t always hold sway over the committee that holds the purse strings. He will also try to meet, even briefly, with the key decision-makers, “but sometimes it is very difficult to get to that point,” he said. Ideally, Larrison will offer to make a presentation to the church committee directly.

One of the more frustrating aspects in sales is dealing with customers who shop based on price and price only, and Matt Groves, an Ohio-based tech who has worked in churches for the better part of two decades, conceded that houses of worship often look no further than cost. This puts AV firms in the position of educator.

“They need a company to come in and help them understand, yes, this is very expensive, but this is why, and this is why you need to go with something like this,” he said.

All of this is, once again, time-consuming, and Stone offered the reminder to those considering the house of worship market as a potential revenue generator that without an investment in relationship building, AV firms won’t succeed. “I’m looking for someone whom I can have a relationship with. I’m looking for an integrator who is a friend,” he said. “Are you someone who I can hang out with and we can catch a meal and just talk? Or maybe commiserate about things we don’t like in the world? That’s the stuff I’m more curious about, and those are the people that have my ear, and those are the people we pay—they’re in our corner. We have a relationship. I know their families. I know where they go to church, I know what their favorite food is because I’ve eaten with them. And that’s huge.”

While many AV firms lug equipment out to client sites to A/B, for example, with audio systems, Ohio-based tech Matt Groves, who has worked in churches for much of his career, noted that this practice isn’t the be-all, end-all of making a sale. “Demoing is important, but when you’re dealing with a church, there are probably not too many people who understand [what they’re listening for],” he said. “In the corporate world, or the tech world, those guys know what they’re listening for, [but in a church,] it’s almost always going to come down to cost, and so they’re immediately going to go for the cheaper option. But if that’s not the best option, then it’s up to the company to say, ‘Yes, it is cheaper; but if you go with this one, it’s better in the long run’ because of whatever features may be available.”
—C.H.

Production Lighting for HOW

“We’re doing a lot of rooms with RGBW fixtures over the congregation,” Hood said. “That lets us [remove] that line between the stage and the congregation, so we can treat the whole room as a canvas, and not just the stage.” He said that this enables churches to avoid having to make the choice between turning off the house lights entirely, or keeping the house lights on during worship (which can make more timid worshippers feel awkward), while at the same time maintaining a visual connection between the praise team and the congregation. “When you have colored [fixtures], now instead of just going black you can go with a deep blue, or purple, so it takes the focus off the people [in the congregation], but you’re not in a totally black room.”

Churches are also embracing remote lighting control via mobile devices, whereby operators are no longer tethered to the lighting booth, noted Derek Cook, account executive at Diversified. “They like to be mobile, they like to be able to walk around, to be able to recall and bring up certain things,” he said. His colleague, lighting designer Steven Hetzer, said that this is especially popular among younger church techs: “They want to be able to whip out their iPhone and control the lights, and it takes one less person a lot of times. It does make it easier for them—it’s something to be considered.”
—C.H.