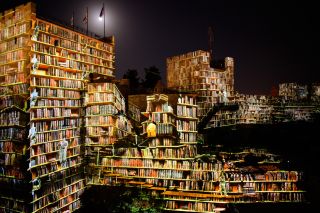 The walls of the Tower of David, an ancient citadel in the Old City of Jerusalem, serve as a stage for a nightly sound and light show. Calling on 13 Digital Projection M-Vision Laser 18K and two E-Vision Laser 8500 projectors, the Night Spectacular installation illuminates the tower with 250,000 lumens and 35 million pixels. (Image credit: Digital Projection)

Projection mapping turns objects, often irregularly shaped architectural elements, into display surfaces for choreographed video presentations. The ability to add dimensionality and movement to static objects is just one characteristic of the projection technique. Another? Its rapid market growth. A 2019 report by Fior Markets that examined global projection mapping trends estimates that the market value will grow by about 22 percent by 2026, in large part because of its expanding use in media events and for product advertising.

But those are only some of the ways projection mapping is currently being used. The most exciting part is that, with quickly advancing technology, the possibilities seem limited only by an artist’s creativity.

Scroll through the gallery below to see  the latest projection mapping innovations.

Barco’s UDX-4K40 is a 37,500-lumen, 4K UHD, 3-chip DLP laser phosphor large-venue projector that “enables rental companies and venue owners to provide stunning experiences while saving both time and money,” according to the company.

Christie describes its D4K40-RGB as “the smallest and lightest, high-brightness, all-in-one RGB laser projector on the market.” Designed with AV professionals in mind, the D4K40-RGB has no heavy external chillers, remote laser racks, or special pedestals, and everything is completely integrated into a single chassis.

“People often think of projection mapping for an event, but it doesn’t always have to be,” said Mike Garrido, senior product manager at Christie. “What strikes me is the ability for projection mapping to be educational. How can you draw people into the experience? Even with advertising, it can be so creative—it doesn’t have to be a billboard. You’re not putting up a billboard, you’re putting up a story. And if you’re really lucky, they’ll let you put audio with it!”

The potential new storytelling options available to integrators through projection mapping may be an enormous asset, particularly as consumers feel increasing advertising fatigue. “The traditional audience is bombarded with ads and signage from mobile devices and flat screens and outdoor LED walls. Because of this, it’s becoming very hard to get their attention,” said Ramzi Shakra, product manager, large-venue projectors, Epson America. “Projection mapping is capable of breaking through the noise and making people stop and pay attention.”

[AV as Art: A Showcase of Projection Mapping]

The technique will not be widely adopted until some innovations are made, Shakra explained. “The market is looking for streamlined, simplified, and less costly ways to do projection mapping,” he said. “We have started to implement convenient features [in our projectors] such as built-in edge blending and tiling assist to help integrators, [and other companies are] introducing ever-more-powerful video servers and mapping software, which are becoming easier to use and more capable.”

One such large-venue laser projector from Epson with automated tiling assist, edge blending, and auto color adjustment is the 20,000-lumen Epson Pro L20000UNL. That model also features interchangeable interface boards, a sealed light engine and optical unit, and compatibility with Epson’s current lens family to allow easy integration with existing lens fleets. The Pro L20000UNL incorporates a laser light engine and electrostatic air filter to provide virtually maintenance-free operation for up to 20,000 hours. It’s equipped with frame interpolation for fast-moving images, along with a wide lens shift and support for a range of optional lenses, including a zero-offset ultra-short-throw lens.

Manufacturers continue to push projectors to match user expectations, which usually means adding features that make them better at achieving dynamic visual goals. “We’re focusing on providing colors that are much deeper and brighter,” said Christie’s Garrido. “When they are, they stand out, which is important when you’re projecting onto buildings, for instance, which are not just white all the time.”

The Christie D4K40-RGB 3DLP projector features an extended color gamut, which produces greater than 95 percent of the Rec. 2020 color space, so even non-white surfaces can display rich, vibrant visuals. The projector offers Christie TruLife electronics, which the company describes as a processing technique that delivers ultra-high-resolution, high-frame-rate video up to 120 frames per second and “unprecedented image fidelity” at 4K resolution and 240 Hz at 2K resolution. Delivering more than 30,000 hours of operation at 80 percent brightness and a 5,000:1 contrast ratio, the Christie D4K40-RGB also features a patented sealed optical path. For typical installations, this means more than eight years of stable, uncompromised, virtually maintenance-free operation. The projector supports a video processing pipeline of up to 1.2 gigapixels per second, enabling 4K DLP at 120 Hz performance. With its 12G-SDI, DisplayPort, Christie Terra SDVoE input card, Christie Link and more, connecting numerous sources is a streamlined process.

Finding ways to decrease projector size without sacrificing reliability or performance is one of the primary design considerations for projector manufacturers. The Optoma ProScene ZK507 is a compact, lightweight laser projector that features 4K UHD with 5,000 lumens of brightness. The ZK507 delivers high-impact multimedia content; in projection mapping applications, for example, it offers minimal pixel compression with exceptional image sharpness and clarity. This Optoma projector features vertical lens shift, 1.6x optical zoom and 12V trigger, as well as RS-232C and LAN connectivity for simple integration and control with industry standards.

Providing high brightness at lower costs is another driver in the projection mapping market, one that Digital Projection is looking to address with its M-Vision Laser 18K projector. A single-chip DLP projector, the M-Vision Laser 18K produces 18,000 lumens with a 10,000:1 contrast ratio. This high-brightness DLP projector is priced to provide budget-sensitive applications with a large-screen option. Additional cost savings come from its laser illumination system: by eliminating regular lamp replacement cycles, system operation is never interrupted and long-term maintenance costs are minimal. Included is Digital Projection’s ColorBoost technology, which delivers optical illumination and software enhancements to produce imagery with higher color saturation and a broader color gamut. Additionally, Digital Projection’s MultiAxis orientation capability allows the M-Vision Laser 18K to be oriented in nearly any position for installation flexibility and application creativity.

Shooting for maximum brightness in smaller form factors continues to bring projection innovations to market. When the 37,500-lumen UDX-4K40 was released last year, Barco touted it as the most compact high-brightness laser projector with integrated cooling on the market. Part of Barco’s UDX line, which includes projectors with outputs ranging from 20,000 to 40,000 lumens, the UDX-4K40 features WUXGA resolution, while its Constant Light Output (CLO) functionality ensures uniform brightness and color over time. Barco says that, without compromising on brightness, the UDX color quality matches xenon quality and outperforms the Rec. 709 color space. With a laser phosphor light source, lamp-related costs and maintenance, as well as image flicker, are not a concern. Additionally, the FLEX² feature allows installers to tune and lock brightness and resolution to specific projection mapping projects.

[The Integration Guide to Projectors and Screens]

Epson’s Shakra predicts the industry will see additional advancements as technology continues to improve, and manufacturers and content creators alike push to innovate. “As projectors get smaller, brighter, and lighter, and video servers and software get more powerful and offer new ways of ingesting the 3D dimensional picture of the object or building, we expect to see projection mapping projects created and implemented faster than ever before,” he said.

No matter how the technology may change over time, as Christie’s Garrido reminds us, the most important thing here is the storytelling. “You’re creating an experience—even if it’s only for a few minutes, you’re taking someone to a new place,” he said. “It’s exciting to see.” •