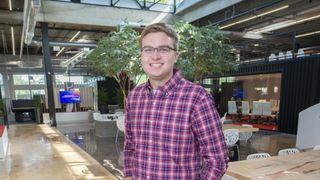 What kind of work were you doing when you were 19 years old? While many teenagers are content to slack off, Connor Bright was leading the design and integration of AV systems for the new headquarters of a 185-employee company—and doing it as a full-time college student.

“I have always been interested in emerging and leading technologies, and how technology can make a meaningful impact on people’s experiences,” said Bright, systems integration engineer at SentryOne, a Charlotte, NC-based provider of database performance monitoring and data DevOps solutions for the Microsoft Data Platform. “The drive for me has always been to make a difference in the experience of users (our customers), and seeing positive reactions encourages me.”

Currently 21 years old and in his final semester of at Elon University, Bright will take the next step in facilitating these positive outcomes when he joins the SentryOne team full-time in February of 2020, where he’ll continue to oversee all of the AV and collaboration systems for the 35,000-square-foot office.

Like many in the industry, Bright’s exposure to the possibilities of audiovisual technology began in theatre. “Most of my background has been in theatre with lighting and sound design, production design—the technical elements,” he said. While in high school at Providence Day School in Charlotte, NC, Bright helped lead the overhaul of the theater’s lighting and sound systems, affording him experience in the dynamics of networked technology.

“I went with a networked Dante system with 24 channels of Shure wireless and a Yamaha QL5 mixer for sound, and an ETC lighting system—making sure everything was networked with the latest LEDs, moving lights, things like that,” he said. While doing this work, he happened to meet the founder and chief technology officer of SentryOne Greg Gonzalez, who offered him an internship at the company in 2016, the summer after he graduated high school. “I was initially doing help desk and basic systems administration work,” he said. “I spent about a summer doing that type of work as well as a few other IT projects.”

By the time the company began planning its move from Huntersville, NC to its current home in Charlotte’s Lower South End neighborhood (LoSo), Gonzalez decided Bright was ready to play a leading role in the process. “I was brought into the project early on by [Gonzalez], who was familiar with my work and background in AV and theatre,” Bright said. “We worked closely together to create the optimal technology experience in the LoSo office, starting from essentially a blank slate.”

That slate was an old fiber mill, an expansive two-building property that the SentryOne team could design from scratch to support the company’s workflows. Working with architectural firm Gensler and the company’s creative director, the duo planned out a technology structure built around versatility. “My role was to specifically focus on the technology, including AV, networking, security, lighting, and how we moved all of our systems over from one office to another,” Bright said. “But AV and collaboration was my biggest focus.”

Like any good tech manager, Bright began by standardizing systems for several different kinds of rooms. “We have room for users to work in all different sorts of ways, to collaborate in all different ways,” Bright said. “We have huddle spaces, conference rooms, booths, the training center, gathering spaces. The technology was designed to be as seamless as it could be in those different spaces.”

According to Bright, there’s a standard setup for huddle rooms, booths, conference rooms, and the training center, and everything is based around the Microsoft Teams Room platform and Crestron technology.

When formulating the technology scheme, Bright and Gonzalez took care to devise a system that worked well together. “We iterated through a few solutions early on, just some smaller pilots and things to make sure we had a good grasp on what exactly we wanted the tech stack to look like,” Bright said. One key consideration was having one single collaboration ecosystem, as the old office employed a mix of products and solutions that often varied by department. “There wasn’t really a clear standard, so people just sort of scheduled it with one service that they liked or maybe felt the most confident with.”

Since SentryOne has a major business partnership with Microsoft, the Teams platform was the natural choice. Now, “every internal meeting is done with Microsoft Teams, which eliminates the confusion of ‘Oh, I have to dial into this meeting, do I need to call a meeting or dial a bridge? Do I need to open this application or that application?’ It’s removed some of the friction around joining meetings.”

This choice then informed many of the other hardware decisions—for example, the selection of Dell 4K interactive flat panel displays for the office’s eleven conference rooms. “We picked the Dell displays in the conference rooms because they can integrate with the Teams Room systems and with the Crestron Flex, to be able to do interactive whiteboarding through Teams,” Bright said. “When you’re in a Teams call, you can whiteboard with the interactive display and you’re joined just like the remote people are, so you can interact with them.”

In addition to the Dell displays, nine Samsung Flip interactive flat panels are positioned throughout the office in open areas, with the aim of providing each department with an ideation surface that they can casually approach and operate. “We picked those because they’re very easy to use: you just walk up and grab a pen and draw,” he said. “You can email the note to yourself when you’re done.” The Flips are also connected to the Enplug digital signage system, so they can display content like dashboards and announcements when not in use. The S1TV digital signage system also includes various displays throughout the atrium and the rest of the office.

Tying everything together is a variety of hardware from Crestron, beginning with Flex UC devices and Crestron Room Scheduling solutions in each space. These platforms integrate natively with Microsoft Teams Rooms, creating a one-touch experience for users. “Whenever a meeting’s been scheduled in Outlook or Teams, users can walk in and hit join, and people who are remote can launch from their computer, tablet, phone—whatever they want,” Bright said.

Crestron’s DM NVX is employed to distribute streaming video, live TV, and digital signage throughout the facility and between buildings, using a 40Gb Cisco Meraki network. “In the main office we have the MDF and the IDF with fiber between them, then we have fiber from the main building to the annex building to connect everything,” he said. “And the reason we did that is to support not only user traffic and general data, but to also support the NVX streaming video traffic over the same backbone.”

Bright and Gonzalez worked with Audio & Light, an AV dealer and consulting firm based in Greensboro, NC, for design feedback, but handled the integration work in-house. “The integration was just me: handling the actual programming, configuration, and setup of the equipment as far as AV goes,” he said. “Our team has eight people on it, and our whole team was responsible for network, servers, AV, security, and communications.”

Of course, the best measure of success for AV and collaboration technology is the amount of use it gets. After rolling out the systems in the new office, the IT team began getting employees up to speed on how to utilize it. “We had a number of training sessions and one-on-one sessions, then bigger sessions where we could just walk people through how to do various tasks that they might need to do: joining a meeting, inviting someone to a meeting, dialing a phone call, whatever it might be, to make sure the users were up to speed and felt confident using the spaces,” Bright said.

To keep tabs on utilization and to streamline management of the company’s AV systems, SentryOne operates a large deployment of Crestron XiO Cloud. “We have probably about 90 devices in XiO Cloud that is overseeing basically every connected Crestron device we have,” Bright said. “It’s the Teams Room systems, NVX, Crestron Room Scheduling, the main processor, the DSPs, and the amps. Basically, if it’s Crestron and it’s on the network, it’s in XiO Cloud.”

Beyond its capabilities for remote monitoring of devices and the ability to push firmware updates and change network settings for endpoints, XiO Cloud provides Bright and his team with a wealth of data on how the facility is used. “We look at utilization, how room usage changes over the time of the day, and what the percentage of free time is,” Bright said. “So if we have one room that’s booked all the time and one room that’s never booked, we’ll look at ‘OK, what’s the difference? Is one bigger, does one have better tech, does one have different tech? A different layout?’ Then we try to balance out everything so that people have rooms to go into when they need to. But we have plenty of spaces, so it’s just a matter of looking at how things are used and balancing everything out to make sure people have a place to go.”

As an example of adapting based on the data, Bright found that a few months ago, there was a need for more conferencing rooms. So he and his team converted two underutilized shared offices into full videoconferencing spaces, an alteration that was well received.

SentryOne completed the first phase of its move-in last October, and has been fully operational with both buildings at its new location since March. And so far, Bright says the reception from the company has been excellent. “My favorite piece of feedback was one of my teammates in marketing came up to me a few months after we’d been in the new space and remarked to me how easy it was,” he said. “She was like, ‘We can actually just walk in and hit one button to join a meeting.’”

As well as things have gone, there were some aspects that Bright feels could be improved. For one, he would have done more training with employees early on, rather than waiting until the rollout was completed. “We would probably say ‘Here’s what’s coming, here’s how it’s going to work, here’s how you’ll benefit,’” he said. “Just to kind of make sure users were better equipped going into it, so there wasn’t any downtime before we got to the trainings.

“I’d also say that we could work to make sure users understand the limitations of some tech, just to make sure they know exactly what’s possible and help them make the most of what we have and what’s out there.”

Overall, though, Bright is happy with the work he and his team have accomplished. “Over the past few years, I can definitely tell that I have earned the trust of my colleagues and leaders at the company,” he said. “While I recognize it is a pretty unusual circumstance for someone so young and still in school to take on such a meaningful role, I know that the projects I’ve been a part of (such as the LoSo office) have benefitted both myself and the company.”