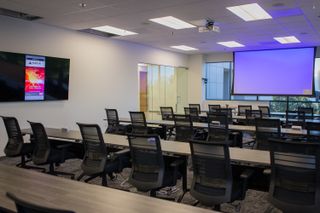 A healthcare organization hired Audax Communications to specify and build an all-IP meeting space to keep costs in check and offer a clean foundation for growth. Audax selected a pair of daisy-chained Stingray DSP Mixers from Phoenix Audio Technologies paired with the Atlona Velocity platform as the key solutions for the training room. (Image credit: Atlona)

The systems integrator is fundamentally programmed to handle jobs of any scale, and always receptive to new challenges. The majority of these jobs are renovations to existing facilities, many of which require some element of IP migration.

Renovations are fun and challenging jobs that ultimately bring end user clients into more efficient and effective AV environments. However, there is something especially satisfying about being involved in a ground-up construction—especially when the AV integrator is involved from the start.

Southern California-based Audax Communications is among the lucky firms that often finds itself in this position. One recent project involved a complete AV and IT buildout for a major healthcare organization in Irvine, CA.

“We work with a lot of real estate developers and agencies that need a full-service integration firm that can cross multiple low-voltage jobs and integration phases,” said Sergio Magallon, project manager, Audax Communications. “We came into the build early and handled everything from structured wiring, optical, and network infrastructure through to access control, surveillance and AV.”

From an AV perspective, the crown jewel of the project was a divisible, multipurpose conference and training room that could accommodate 50 or more medical professionals. That space would also be used for distance learning, with a soft codec conferencing infrastructure to communicate with facilities throughout the Americas and Europe.

Naturally, the end user also had cost in mind. One mission was clear from the start, however: “There was never a question that this was all going onto the network,” said Magallon. “We wanted a system that we could scale between some of the smaller huddle rooms and the larger conference spaces in the building. That made AV over IP the logical choice. The challenge for us was to build a technically superior solution that didn’t sacrifice quality for a lower price point.”

All roads led back to two key vendors: Atlona, which would supply the video routing, distribution and control; and Phoenix Audio Technologies, which would provide the core Dante-enabled DSP for audio and integration to soft codecs. The result is an all-IP meeting space that kept costs in check and offers a clean foundation for growth.

The integration team made the backbone its first order of business, selecting Cat 6 shielded wiring and an Araknis managed switch. The structured wiring provides connectivity from the rack to all AV devices, while the switch reliably supports the multicast architecture that Audax envisioned.

“The switches provide PoE power for the encoders and decoders, and the multicast configuration means they can easily handle the traffic that the encoders and decoders require to talk to each other,” said Magallon. “We wired everything locally to that switch, and from there we have an uplink to the main server room. That will allow the system to easily grow to other rooms and accommodate any future upgrades to existing rooms.”

The encoders and decoders that Magallon references are from Atlona’s OmniStream Pro AV over IP family. In fact, Atlona gear represents more than half of the equipment in the space, with single- and dual-channel encoders, single-channel decoders, OmniStream USB over IP device adapters, an AT-HDVS-CAM camera, and Velocity networked AV control.

For audio, Magallon went straight for a Dante networking solution that could live on the same network. Same as on the video side, he had both budget and quality in mind. And as time was at a premium, he wanted a system that was quick to configure and deploy. The Audax team selected Phoenix Audio’s Stingray DSP solution, which covered all of these bases.

“All audio is routed via Dante, including podium and ceiling microphones,” said Magallon. “The ease of installation with Phoenix is unsurpassed. It was a 20-minute job to configure and deploy two Stingrays.”

The layout of the room is clean and wide open, with most of the technical infrastructure concealed from view. The main podium houses the AT-HDVS-CAM camera, a microphone, keyboard, and a mouse on the surface, with a dual-channel OmniStream encoder and USB device adapter integrated within. One encoder channel is dedicated to the PC for presentations, with the second to accommodate the camera or BYOD devices around the room.

Tables are dispersed throughout the space, each equipped with a single-channel OmniStream encoder that trainees can connect to. The decoders and other USB adapters are installed in the central rack. Video content is decoded and presented on a 90-inch display, as well as through an Optoma 4K ceiling projector that feeds a Da-Lite 130-inch motorized screen.

“We like OmniStream because we can easily move everything back to the network switch,” Magallon said. “It’s a cleaner physical installation with less cabling, which means fewer man hours on the job. For the end user, the flexibility of the network architecture opens all kinds of collaborative opportunities. They can connect several individual training areas, or everyone in the space can work together.”

The Dante audio coming out of the switch—two Stingray DSP systems manage the audio flow in and out—is amplified by Atlona GAIN 120 networked amplifiers. The amplified audio signals, which originate from Dante-enabled Shure MX202 Microflex overhead microphones as well as embedded audio in the OmniStream systems, are then passed to JBL Control ceiling speakers for sound reinforcement. The JBL system offers a 70-volt configuration to accommodate the distance between the rack and the six ceiling speaker positions.

Audio clarity is critical given the long-distance training initiatives that take place on a regular basis. “The training room and soft codec conferencing alleviate the costs of flying medical professionals and students in from other states and continents,” said Magallon. “We wanted to optimize the sound for these long-distance sessions. One of the first sessions was with a chief executive in Italy, and he commented about how crisp and clear they sounded.”

Atlona’s Velocity control system brings the entire ecosystem together by centralizing all AV control elements onto the network. Magallon’s Velocity configuration routes everything through a gateway to enable control, and then uses the interface to create rooms, scenes and macros. He said the “miracle worker” of the system is the ability to treat the gateway as a network device.

The general takeaway of an all-IP meeting space installation is that it reduces the costs for everyone involved, including labor expenses that would, in many cases, have been passed on to the end user.