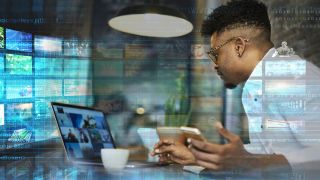 Review the statistics on how the human brain retains visual images at a rate higher than reading text, and it would be hard not to use video as a medium for communication.

The stats vary among scientific research reports, research firms, scholarly articles, and not-so-independent research. Whether two-times or sixty-times greater, the retention rate of watching a video versus reading text is exponentially greater. This applies to all age groups.

According to its own stats, “YouTube overall, and even YouTube on mobile alone, reaches more 18–34 and 18–49-year-olds than any cable network in the U.S.”

If your organization, college, or university is not already producing video content for recruiting, training, or other types of communications, that needs to change. That is, if you feel it is important to engage with what in 2015 the U.S. Census Bureau declared the largest demographic in the U.S.—millennials. Today they range between 17 and 35 years old.

Both Sides of the Case

According to Cisco’s Visual Networking Index report updated in September 2017:

Not long ago much was written about the demise of the brick-and-mortar university model. The massive open online course (MOOC) movement was set to shutter the traditional classroom. Yet a 2014 report by Justin Reich, Menschel Rearch Fellow at HarvardX, revealed that on average, 6 percent of all HarvardX (HX) open online course registrants earn a certificate. “That number is in keeping with the ‘low’ completion number for MOOCs the media has often rightly zeroed-in on,” the report stated.

“Many learners sign up for a MOOC without ever intending to complete it,” the HarvardX report concluded. HX students who “intend to complete a course are 4.5 times more likely to do so than intended-browsers.”

If you had a hard time staying awake during “sage on the stage” lectures in a darkened auditorium during college, imagine how much harder it would be to hold the attention of a student sitting in front of a screen at home.

Corporate enterprises and other organizations often cite the abysmal MOOC completion rates as an excuse to not invest in video recording or live-streaming. Dig a bit deeper, though, and everyone can impart lessons from years of trial and error, research and measuring results done by many higher education organizations.

In 2016, an EDUCAUSE Center for Analysis and Research report noted, “active learning acknowledges that learning entails interaction and engagement—active involvement—with the material. It encompasses a set of techniques and strategies to move from ‘sage on the stage’ slide-and-lecture-focused teaching to pedagogy that engages students in ‘doing things and thinking about what they are doing.’”

Whether recording or streaming an all-hands meeting, a corporate training or recruiting video, the death knell is having one fixed-focused camera on the speaker. Think active, and actively think.

Active learning is still fairly new. It’s possible if colleges and universities had been implementing active pedagogies, MOOC completion rates would have been higher.

Editorial note: We’re happy to report that according to a 2017 Pew Research Center survey, “Millennials in America are more likely to have visited a public library in the past year than any other adult generation.”