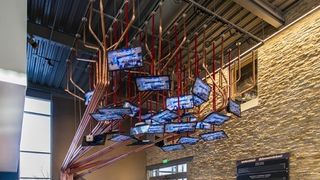 Digital photo tree helps visitors get in the mood for a joyous children’s museum.

Would you smile or cringe if you heard someone say that, while they were using something you had worked on for more than two years?

Community Tree above the entrance and registration desk for the museum. Photo by J Gramling Photography. Jonathan Goldstein smiles. As Director of Exhibits for the Children's Museum of Denver at Marsico Campus, silly was just what he was looking for. “You have to put yourself in the position of a parent or grandparent bringing kids to the Museum,” he explains. “It can be a headache to get everyone together, drive into the city, and herd them all into the building...

“But then there’s a moment when we strip some of that away, where we get you laughing and playing with your kids, get you ready to really start having fun in this wonderful place. That’s what the Community Tree is all about.”

The exhibit Goldstein is describing is a 20’ tall, abstract copper and steel tree-like structure with 30 Planar LED-lit LCD displays forming the canopy. Each shows a picture of a family. It’s the first thing visitors see when they walk into the Museum, and the first thing most people do is walk up to a camera and monitor at the base, shoot a photo, then watch as it appears above them.

There are props they can use –big red lips, mustaches and masks– because the point is to be as funny as you possibly can be, together as a family. “People love it,” Goldstein says.

Close-ups of the Planar displays with the Mac minis mounted behind them. Photo by J Gramling Photography. The Community Tree is part of a major addition that more than doubled the size of the Museum when it opened last November. “We were the most crowded children’s museum in the country, if not the world, and we desperately needed to expand,” Goldstein explains. The expansion includes two new wings with a climbing tower, art studio, teaching kitchen, water and energy exhibits, plus a new entrance and a 30,000 square foot outdoor adventure park. The whole Museum is based on the idea of “sophisticated whimsy,” where children and adults learn through play.

Goldstein says he started planning the Community Tree about two years ago, looking for a way to bring visitors immediately into the mood of the Museum. “I had the idea of lifting these displays and configuring them such that you’d see yourself in a different way.”

He said the exhibit didn’t start out as a tree, but when he showed his early drawings to colleagues, they kept returning to that metaphor, of families interconnected like branches and leaves.

Once someone shoots a photo, it appears on one of the displays up in the canopy, then moves from display to display as new ones are shot. After it passes the 30th display, the image disappears. “To alleviate any privacy concerns, we promise our guests that we will not keep any of the images,” Goldstein says.

To participate, visitors step up to a steel and walnut cabinet at the trunk of the tree, which includes a digital camera, a 31th Planar display that shows their image, a rack that holds the props, and the electronics that power the exhibit. When they push a big green button, a timer counts down with 3-2-1 showing on the display, and the picture is shot. A walnut bench gives parents a place to sit for the photo and something for smaller children to stand on so they appear in the frame.

The roots of the tree

The equipment cabinet at the base of the tree, with another Planar display used as a preview monitor, the camera (above it) and the button (below it) that a family member will press to start the countdown. Photo by J Gramling Photography. “We originally got involved in the project about two years ago,” recalls Brian Thompson,

Director of Design and Programming for Logic Integration of Lone Tree, Colorado. “Jonathan was working on the design for the structure, but he needed help with the electronics.”

Thompson and his team at Logic designed and built a working, floor-based mockup and showed it to Goldstein, the Museum and potential donors. “They really liked it and decided to move forward.” The main challenges for Thompson were choosing highly-reliable components that would not need to be serviced up in the ceiling, and inventing a simple way to move the images from display to display.

“We were especially concerned about the displays, because if one were to fail, we would not only need to bring in a lift, but we would most likely need to remove several other displays to get at the one needing service.” Thompson says he chose 46” Planar® Simplicity™ Series SL4650 LED-lit LCD displays because he has used displays from the company in projects all over Colorado, including a very large installation at the convention center. “They’re built for 24x7 operations, and they hold up very well,” he explains. “We have a very good, long-term relationship with Planar.”

Thompson solved the image control issue by attaching a Mac® mini to the back of each display, then linking them to a Mac mini server in the cabinet at the trunk via an IP network. “Our web developer, Todd Walsh, created what is essentially a little website on the server, which the other Mac minis access over the network.”

For the camera, Thomson used an off-the-shelf webcam plus a standard Macintosh application, Apple Photo Booth®, to control it. Walsh, President of Boco Web Solutions of Boulder, says he wrote a solution using HTML5, PHP and AppleScript to grab the images from Photo Booth, then send them up to the client computers in the canopy. “There were other ways we could have created the system, but they would have been far more expensive,” Walsh says. “We were careful to use off-the-shelf software, so programmers at the Museum could modify it if they chose.”

One of the nice features of the interface is that Museum staff have control over the images on the tree from a computer at the reception desk, using a standard web browser. If someone shoots an inappropriate photo, or a parent asks that an image be removed, they can remove it easily. “They can also load up special images or logos for a corporate event – really, anything they want, like a digital signage display,” Thompson adds.

Goldstein says they are already considering enhancements to the system, including the possibility of adding a photo printer in the gift shop, so guests can take images home with them. “We often see people finding themselves in the canopy, then shooting their image with their smart phones to post it to social media.”

An important part of the exhibit’s success is that it’s fast. “Ten seconds is about right, to capture the image and beam it up to the first display,” Goldstein says. Nonetheless, Thompson adds that when he visits the Museum there’s always a line.

The push button actually clicks a modified Apple mouse to start the countdown sequence. “That button, as simple as it is, actually confuses a few of our younger guests,” Goldstein says. It turns out that some three year olds expect a display to be a touch screen, and they will pound on the image trying to make something happen.

Zoe Ocampo, Associate Director of Marketing and Membership, loves the exhibit and how guests react to it. “We really hoped to set the bar high for other children’s museums, to be world class,” she says. “The Community Tree gives our guests an opportunity to be themselves in a natural, funny, silly, joyous environment—just what we hoped for!”