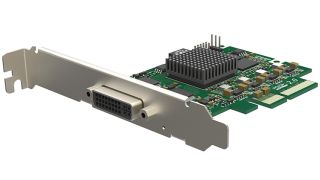 The Pro Capture DVI 4K card supports single-link and dual-link DVI inputs, capturing video up to 1080p HD over single-link or 4K 2160p30 over a dual-link connection. The card can also support HDMI 1.4 signals up to 1080p with embedded audio using a simple HDMI-to-DVI adapter.

Designed for professional A/V and broadcast applications, the new DVI-input model complements Magewell's previously-announced 4K cards. The Pro Capture AIO 4Kcaptures 4K video at up to 30 frames per second over its HDMI 1.4 and 6Gbps SDI interfaces, while the Pro Capture AIO 4K Plus supports 60fps over HDMI 2.0 and 30fps via SDI. The Pro Capture HDMI 4K and Pro Capture HDMI 4K Plus support 30fps and 60fps 4K video, respectively, for HDMI-only uses. All five cards support resolutions up to the 4096x2160 4K digital cinema and production standard, including 3840x2160 4K Ultra HD.

"The addition of the Pro Capture DVI 4K continues our commitment to offering our customers a flexible choice of input interfaces to meet their exact needs," said Amy Zhou, Sales Director at Magewell. "With HDMI, SDI, DVI and combination models, we now have a high-performance capture solution for any 4K application."