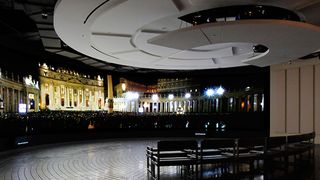 The St. John Paul II National Shrine isn’t just a place where people go to learn a bit of history. They go there to actually experience it.

Located just a short walk from the Basilica of the National Shrine of the Immaculate Conception in Washington, D.C., the St. John Paul II National Shrine features nine galleries that immerse visitors in the extraordinary life of St. John Paul II. It covers everything from his birth in Nazi-occupied Poland to his priesthood and ministry as bishop, all the way through his remarkable 26-year pontificate, to his death in 2005, and his canonization in 2014.

As a gift to the Vatican, the Knights of Columbus embarked on a building renovation that would become not just an homage to St. John Paul II’s life and work, but also a place of worship that is both a pilgrimage and cultural education. The Knights engaged internationally recognized museum planning and design firm Gallagher & Associates to tell the story and preserve the memory of St. John Paul II through A Gift of Love: The Life of St. John Paul II, a 16,000 square-foot permanent exhibit, which opened in 2014.

Gallagher & Associates had the vision for this special space within the St. John Paul II National Shrine. Design & Production Inc. (D&P) was brought in to deliver the technology. The group included several others, including Donna Lawrence Productions, who spent several days in Rome shooting footage in 5K Ultra HD, collecting archives, and recording audio, which is currently used in the exhibit. The group worked together from the beginning to make sure everything was perfect.

“It’s a very, very exciting format that Gallagher and Associates proposed,” said Donna Lawrence, principal of Donna Lawrence Productions. “They basically laid out the idea for the space in the theater and challenged us to use that to greatest effect to set up the story of Pope John Paul II.”

“They completely gutted the space, so it was just a black box,” said Dale Panning, senior systems engineer at D&P, an exhibit project management, production, and media services firm. “We actually went into the main theater and mocked up the circular screen along with Donna Lawrence and Gallagher. It can look right on the plans, but it’s got to feel right—sightlines, etc. So we worked it out in real time with masking tape. That was a luxury that sometimes you don’t have.”

The exhibit was designed so that visitors would begin their journey in a large theater, move through connecting gallery spaces containing interactive displays and personal artifacts, and end their experience in a smaller, more intimate theater.

“The two theaters are certainly important,” said Bob Haroutunian, principal at PPI Consulting, who was also brought in early on the project. “They represent the introductory and the exit experience. There is an entire exhibition in between the two with lots of media elements—everything from audio to video experiences to interactive touch tables, so there is a great deal between the two.”

TELLING A STORY WITH TECHNOLOGY

To deliver all of the content Donna Lawrence & her team collected, the AV equipment had to be chosen carefully As soon as visitors step into the opening theater, they are transported to Vatican City, complete with cobblestones in the same pattern as St. Peter’s Square, the large plaza in front of St. Peter’s Basilica. This 180-degree theater features a screen that measures 12 feet tall and 68 feet wide. That’s massive display is paired with five Digital Projection Titan WUXGA 3D projectors. There’s also seating in the center of the room, so visitors can take in the sights and sounds, which cover St. John Paul II’s early life, from his birth and the moment he decided to dedicate his life to the church, through his rise to the papacy of the Catholic church.

“We have this enormous circular theater—a 180-degree theater that has absolutely clean site lines all the way through it,” Haroutunian said. “There are two parts to that. One is, typically when you do these shows, you always use an odd number of projectors because if you have an even number of projectors you would have a seam in the dead center and you never want that setup because that’s where people typically focus on. If there are any alignment issues, it would become immediately obvious. Typically, when you see these kinds of shows you will see a three-screen or five-screen show. The other reason was that Donna Lawrence, the producer, and Gallagher, the exhibit designer, were trying to create an immersive experience. If you look at where the bench seating occurs, it’s pushed far enough forward that the five screens completely immerse you. You don’t see the edge of the screens—the whole aggregate surface. You don’t see the edge of the image.”

As guests move their way through the exhibit, they’re greeted by a second theater space. This was designed to deliver a similar experience as the entrance theater, but on a smaller scale. Instead of five DPI Titan WUXGA 3D projectors, this area has three machines projecting images of the Basilica and the Vatican. Lawrence described it as “a much more contemplative space,” which focuses on St. John Paul II’s final days, his funeral, and his canonization as a saint.

“With that massive sweep of canvas, you have a great opportunity to immerse people in the absolutely unique story of St. John Paul II. He connected with people in unprecedented ways,” said Lawrence. “He brought the story of the Catholic church and Christianity to the masses, and especially young people. The theater has the potential power to tell the story of his very unique way of reaching people.”

To deliver all of the content Lawrence and her team collected in an immersive fashion, the AV equipment had to be chosen carefully. Digital Projection Titan WUXGA 3D projectors were picked because they could create an experience that would make visitors feel like they were standing in the Square watching the election of Pope John Paul II to the papacy, as well as other pivotal events.

Because of the lumen performance, these projectors are compact, but still able to pack a punch. Each of the 3-chip DLP units feature a resolution of 1920 x 1200, a 16:10 aspect ratio, a 2,000:1 contrast, ColorMax calibration technology, and much more. Of course, it was the image that really won the group over.

“The Digital Projection DLP projectors were chosen because of their capabilities for dealing with a surround, curved, 180-degree screen,” said Lawrence. “They were chosen because of their image quality and their ability to deal with unusual surfaces and geometry and their reliability and programmability for all of the special requirements of this show.”

BRINGING THE EXPERIENCE TO LIFE

As the final step of the installation project, D&P brought in 7thSense Design for a few video and audio tweaks. “D&P first contacted us back in October 2013 to discuss their server needs for the project,” said Ken Showler, support director for 7thSense Design. “Once site commissioning was heating up, we supported their team on-site for the display’s alignment, and then for the media installation with Donna Lawrence Productions.”

According to Showler, the exhibit uses 7thSense servers for both of the theater spaces, one with five channels WUXGA DVI and the other with three channels WXUGA DVI. Both also have 8-channel balanced analog audio. These servers are tied into a pretty stellar audio setup, which includes several multi-channel QSC amplifiers, Fulcrum speakers, and so much more.

“My background was originally in music and audio production so I believe that audio, music, and story really carry so much of the emotional meaning of a project,” said Lawrence. “So, of course, when you’re telling the story of Pope John Paul II, the soundtrack and the music are absolutely critical to reaching the visitor in the way that you want to, and with maximum sort of impact and clarity about the story. This installation also includes a very, very rich audio installation—an immersive surround-sound system—that works extremely well in the circular space and supports the story in really a very important way.”

Rounding out that story is a collection of automated lights and motion sensors. Everything is tied into AMX control, with a touch panel located in each theater for easy access to the system. That way, if there’s a group coming into the theater, they can stop and restart the entire production. Everything works together to create a spiritual, unforgettable experience for millions of visitors each year.

“The intent here was to create a very engaging, immersive experience,” said Haroutunian. “These experiences are the kinds of things people are looking for if they are going to take the trouble to go to a destination or a museum or an exhibition or whatever. They want to see something that they are not going to get at home.”