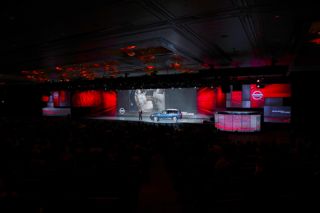 At the November 28th InfoComm/Rental & Staging Roadshow that will take place in Washington D.C., one of the Presenters will be Drew Taylor of High Resolution Systems, who will present “Configured Control for Live Events”, talking about new generation control systems for live events that now allow the user to quickly navigate the user interface that hides nothing and allows the user to view, edit, and have full control and flexibility of their control system. So a “configured control system” is now within reach of the average stager. How do they work? And how do these new generation “device controllers” fit in with the “content” controllers like Dataton, Barco, Spyder, etc? New tools give the stager a graphical interface and the ability to configure in real time– a big step forward. As a preview to the November 28th presentation, here’s a look at a feature article on Drew Taylor and configured control for live events, from the current print issue of Rental & Staging magazine.

Stagers have always prided themselves on their ability to control a wide variety of inputs on a corporate show, or concert. Historically, controlling devices on live events was more art than science, an anxiety-producing undertaking not for the squeamish. After all, the kinds of interface control devices prevalent in the installed AV world were just not available for the live event market. So cueing and switching between many inputs, and being able to graphically see those inputs in some manageable form in real time, was not really in the cards. You did all that by seat of the pants management of the show, on the fly, with a lot of guys with headsets poised around the room to manually cobble together the show. And with more gray hairs after each harrowing show. And if you couldn’t stand the fire, then find a new line of work. Could be fun, could be not-so-fun.

Has this changed? With companies like High Resolution Systems making many inroads into more seamless control interfaces, the answer is yes. HRS offers what they call a “software-based control platform that allows simple, cost-effective control of devices using IP (TCP/UDP) or serial (232/422/485) protocols. We talked to Drew Taylor at HRS to have him translate that brochure-speak for us, to explain their UDC (Universal Device Controller). Drew Taylor grew up in the live staging business, spending time with his video engineer father backstage at corporate live events. He launched his own career as an AV tech at the Phoenix Convention Center then became a technical support and training sales professional with Vista Systems, makers of high-end Spyder video processing technology, which was then new to the market. Subsequently, Drew became a freelance Spyder engineer/operator controlling content for screens in large-venue and arena-style live corporate events, recorded and live TV specials, and technology installations. For the last three years Drew has been a project manager and partner in HRS Control where he manages sales, support and product development. I asked Drew how these new generation “device controllers” fit in with the “content” controllers like Dataton, Barco, Spyder, etc.

“Those kinds of controllers that do pixel mapping, warping, etc., are different” said Drew. “Something like Dataton is generating content to go to the screens. Think of what we are doing, as more like what AMX or Crestron do in an installed system, a control system that gives a user interface. But the difference–aside from the application of course– is that with us you are not writing any code, ever. Basically the systems lets you quickly navigate the user interface, that lest you see everything, and allows you to view, edit, and have full control and flexibility of the control system.”

Multi Image Group director of video engineering Seth Tours, backstage with the High Resolution Systems UDC (Universal Device Controller) at a Nissan event.“Our background is in staging,” continued Taylor, “and we wanted to build a ‘configured’ control system. We developed this out of our own need with our own rental & staging company: High Resolution Engineering– we currently specialize in large screen switching. We are now doing house of worship, conference rooms, but our biggest customers: staging, and broadcast–because both of those are ‘live’ applications. All our stuff is IP, or serial, or contact closure. However, in general, serial is on the way out. Yes, there is still legacy stuff out there, but Christie, Barco, Vista Spyder PlayBack Pro– they are all Ethernet-based.”

For an example of a live event that used this technology: Multi Image Group (MIG), an event production company based in Boca Raton, Florida, put its new High Resolution Systems UDC (Universal Device Controller) through the paces on high-profile shows “right out of the gate,” said MIG director of video engineering, Seth Tours.

“We had been working with High Resolution Systems for the last decade on Vista Spyder rentals,” notes Tours. “We purchased UDC about six months ago, and the first show we used it on was huge.”

Tours notes UDC for its flexibility and versatility. The ability to have the user interface available on a variety of platforms is extremely helpful, he says. “The record operator may not have room for UDC on a laptop so we have it on his iPad. Others may prefer it on their iPhone or Android. It’s cool how you can change platforms.”

“I jumped into it with one hour of basic instruction,” Tours says. “I began to attack the advanced features on my own with some tutelage from Drew Taylor at High Resolution Systems, over the phone.”

MIG was able to use UDC to control all the Christie projectors in the room, pushing a button to close the shutters on some projectors and open them on others… with one button push.MIG’s UDC made its debut at the Nissan National Dealer Meeting at the Aria Resort in Las Vegas where it controlled 12 Christie projectors, three Grass Valley DDRs, multiple Blackmagic routers, eight AJA Ki Pro recorders and two Playback Pros.

“There was widescreen video projection at the back of the stage from two stacks of blended projectors,” explains Tours. “At one point in the show, when Nissan started to play their commercial reel, they didn’t want it to overlap the blend area so we stopped one set of projectors and started to use a third stack we set up in the center. To do that cleanly, you don’t want the unused projectors to have their shutters open because there would still be some brightness to the black. But we were able to use UDC to control all 12 projectors in the room, pushing a button to close the shutters on some projectors and open them on others… with one button push.”

The UDC interface running on Apple iPad and iPhone made it simple for the operator to control the eight Ki Pro recorders, Tours explains. “He could start all eight record decks, rewind them, play them. He had simultaneous control of all eight from one set of buttons.”

UDC was also able to build a macro for the router to switch from a main Vista Spyder X20 system to a spare if needed. “We never had to use the spare, but UDC made it easy to do so if something happened to the main Spyder,” he says. “By using UDC on his iPad interface, the Spyder operator could switch from the main system to the back up with one button push and we’d be off to the races in two seconds.”

MIG also deployed UDC at a big incentive event for a financial services company at the Biltmore in Phoenix. “They also wanted to control Ki Pro recorders,” says Tours. “They needed to be able to stop and start four decks at certain points in the show: By truncating the amount of material recorded, they could reduce file size when they edited the show afterward. The only problem was the record operator was also shading three handheld cameras. He barely had time to do both. So we put UDC on his iPhone, and he just had to glance away to start and stop the Ki Pros.”

Using the UDC with an iPad or even iPhone as the user interface is a common configuration.

Both shows used UDC’s scheduling feature to warm up the projectors in advance of arriving on the scene, he notes. “So when the operators arrived, the projectors were ready for alignment. When you’re dealing with 12 projectors having them ready for you is a big deal.”

Tours also noted the new controller groups feature which enables customers to build multiple versions of the same page in their control system, specify them as a controller group and have different resolutions and aspect ratios automatically available for a range of control devices as needed.

I asked Drew Taylor what trends he sees this year, in control for live events.

“We see an expanded need for control in different areas,” said Taylor. “Because of widespread use of computers on shows. Show callers sit in front of house, and they want to be able to see all the screens on their monitors. So there is an increasing need to create something simple. The biggest trend in past five years? Do more, for less money. And we try to fit into that.”

Taylor also commented on the relationship, in any live event, between the lighting control, and video control.

“On concert tours, they often want to control everything from a lighting console, and for there to be a ‘DMX bridge’”.

Why would an LD need the kind of control afforded by UDC?

“Because the lighting board is mainly designed to control lighting,” said Taylor. “DMX is mainly dominant in the tour world, because they do the same thing every night. So having everything controlled from one point makes sense. It’s all about preprogramming, that’s done during rehearsals. So UDC is used to control the video equipment–projectors, Barco encore, Spyders, what have you, so UDC is between the lighting console and the video equipment. An LD would configure a computer running our software with a DMX translation table, so our software listens for the DMX signal, then UDC sends out signals to the video gear.”

Will producing live events ever be as easy as installing a boardroom AV system, where you have many hours and days to tweak it ‘til it’s right? Never, especially for corporate events that are almost always one-offs (unlike concert tours). But new tools that give the stager a graphical interface and the ability to configure in real time– a big step forward.