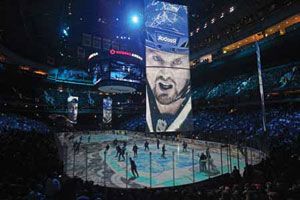 (Top) The ice projection is complemented by images displayed on four scrims which deploy and retract several times during each game. (Bottom) Four 30,000 lumen LIGHTNING 45 sx+ displays driven by video source material from Green Hippo Hippotizer servers create an image mapped to a 200-foot by 80-foot image on the ice.

Ice hockey’s Vancouver Canucks installed a new Digital Projection International (DPI) high-brightness system at the team’s Rogers Arena in time for the start of the new season. Designed to reinforce the team’s brand identity, intensify fan loyalty, and, just as importantly, encourage early attendance and help increase revenues, the DPI system is integral to a pre-, post-, and in-game entertainment package that resets the bar at a new high for creativity in the NHL.

Darling noted that time was tight: “The Canucks went to game seven of the Stanley Cup finals last year, which significantly compressed the downtime between playoffs and pre-season.” Combined with a busy schedule of other events, including music concerts, as well as ice maintenance at the 475,000-square-foot arena, that meant that Epic could often work for only four or six hours at a stretch, he reported.

Four 30,000 lumen LIGHT NING 45 sx+ displays were selected for the project, driven by video source material from Green Hippo Hippotizer servers, split into segments by a Datapath X4 videowall processor, to create an image mapped to a 200-foot by 80-foot image on the ice. Creative content is built to 1920x1080 native, expanded to 2800x1450 by the Hippotizer, then cut into separate channels of 1400x1050 by the Datapath machine. The Hippotizer also provides control of the image overlaps and edge blending.

The Hippotizer servers are installed in a space behind the control booth on the 500 level, Darling reported. “We’re running this all from a High End Systems [Road Hog] Full Boar console, so we’re triggering lighting and video from a DMX source. That’s expanding to issue commands or triggers out to the 360 on the ring beam and other pieces of content. The servers are connected to the area above the clock by a dedicated fiber backbone. We’ve got that branched off to other areas of the building so they can see the content remotely.”

The high-lumen DPI projectors, chosen for their ability to overcome the ambient public safety lighting, as well as the bright, centrally suspended LED scoreboard, have sparked further creativity from Raham and his team. “We’re so glad we went with the higher lumen displays because they have so much visual punch,” he commented. “We’re discovering new ways to use them every time we work with them.”

The ice projection is complemented by images displayed on four scrims, each four stories in height and located at the rink’s corners, which deploy and retract several times during each game. “There were a lot of people doing center cluster displays, like the Lakers, so we came up with something different,” explained Darling. “They’re not the only ones who have ice projection; however, they are coming at it from a unique angle.”

The system is brought into play before the game to build excitement in the crowd, and display imagery during the national anthems and pre-game ceremonies. The system projects rock concert-style visuals during the light show at the end of each intermission, and is also deployed during the game, during periods when there is no action. At the end of each night it is again brought into play for the presentation of the Three Stars, the game’s MVPs. An installed L-Acoustics V-DOSC speaker system supplies the accompanying audio.

The projectors needed to be installed as close as possible to each center half of the ice in order to align the images with the ice rink. Locations 90 feet above the ice provided sufficient room to shoot below the clock without creating an obstruction. The integrated pitch, roll, and yaw adjustments facilitated by DPI’s RapidRig rigging frames allowed the installers to avoid lighting trusses, banners and other obstacles and still accurately frame the images. Precise mapping of the images to the ice was further aided by the expanded lens shift capabilities built into DPI’s LIGHT NING platform.