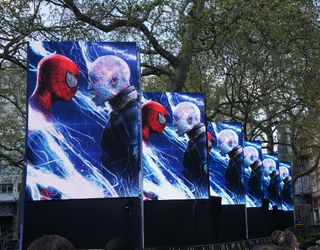 XL Video LED screens
The premiere was attended by the stars of the movie including Andrew Garfield, Emma Stone, Jamie Foxx and Dane DeHaan. For the red carpet exterior of the cinema, XL Video was brought in to provide a video solution including multiple LED screens and media control.