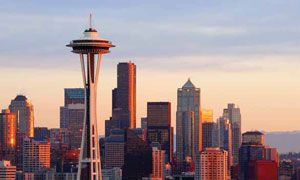 SEATTLE, WA—It’s hard to believe, but Seattle’s Space Needle, an icon of America’s technological leadership, will turn 50 next year.

Amazingly, the privately held attraction, which pulls in more than 130,000 visitors per month, does not seem dated. That’s no doubt due to its owners’ willingness to invest in upgrades. Among these was the remodeling of its meeting and banquet facilities last spring, including the addition of an all-digital audio/video system using a Crestron DigitalMedia backbone.

“They were losing the ability to rent the space to their more demanding clients, in particular Microsoft and the Bill and Melinda Gates Foundation, which are both nearby,” explained Tyson Scherb, sales engineer at Seattle-based Commercial Sound & Video. “These clients needed to show digital high-definition content, including copy-protected media, and their older analog system was not adequate.”

Eric Rommen, the Space Needle’s Banquet Coordinator, says that he and the tower’s owners began planning the upgrade in the fall of 2010. They took proposals from several custom integrators, explaining that they were looking for better sound and easier operation as well as the ability to handle digital sources. “Commercial Sound seemed to have the best solution and the best service.”

Roman said the Skyline Center hosts 30 to 50 events each month, ranging from corporate directors’ meetings to training sessions, weddings, and holiday parties. The facility is arranged in a triangular pattern just below the Space Needle’s observation and restaurant decks. While all three rooms offer spectacular views, a large meeting is necessarily divided.

That fact makes the quality of the sound and video especially important, since a presenter speaking in the Puget Sound Room, for example, can only be seen and heard in the Lake Union and Seattle Rooms via the audio/video systems. Rommen keeps a portable high-definition Canon camera on hand at all times, plugging it into the system to show a presenter’s image on the projection screens and to record meetings. “Our Seattle Room is a great space for a board meeting, or we may use it as a game room for a Bar Mitzvah,” Rommen explained. “I can put in an Xbox, Wii, iPod, or Zune music or movies, or anything else the customer wants.”

Scherb said he felt a Crestron DigitalMedia network would be the best way to meet the facility’s needs for the highest quality video plus the ability to distribute HDCP copy-protected media. “At the time we were the only player involved who could offer DigitalMedia, and that proved to be a crucial advantage, as it is the best game in town as far as video processing is concerned. In addition to that, it’s an easy system to set up, which allowed us to offer a more competitive installation price.”

With the availability of the high-end systems, Rommen said he can offer his clients a value rarely found in a hotel or conference center. “We have one client who always brought in his own projector. I told him to give our new system a try. He plugged in, saw the quality we were able to offer, and said, ‘this is amazing.’”

One challenge that the old system never overcame was the building’s steel structure. “We would host auctions, either silent or live, and always had problems with the wireless mics,” Rommen said. Commercial Sound overcame the problem by installing four Shure UA820A antennas, positioning them to cover the entire meeting space despite shadows created by the central elevator shaft. “You can move around the entire space now and not cut out. It’s really nice and smooth.” With five wireless systems available, staff can easily assign mics, as needed, to each room using either of the Crestron touch screens.

Rommen said that while the Crestron touch panels are available for use by customers, he or another staff member normally operate the audio/video system as part of their high-service approach. “It’s easy enough for our clients to use the touch screen, but generally we take care of it for them so they can focus on their meetings.” Because the systems are network-based, only one person is required to support the entire facility. “If someone calls from another room and says, ‘Can you help us switch an input?’ I can do that remotely.”

After a year of daily use, Rommen says his managers and customers are very happy with the upgrade.

“We love the new systems. My regular clients are confident that we have an audio/video system that works and features the best technology out there today. We know, too, that we’re ready for whatever the future brings.”