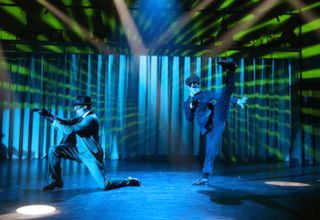 Maloney’s diverse array of animated projections transformed the martial arts studio set, featuring concrete-like side walls, wood paneling, cinderblocks, and an archway into a back room, into a backdrop for many scenes from Lee’s life. A proscenium arch, projected around the arch in the set, added grandeur to a Chinese opera sequence. Shadows of telephone poles and other exterior elements created a Hong Kong alleyway for a street brawl. Vintage ’60’s graphics and a show open styled on The Green Hornet TV series recreated Lee’s American TV debut. And training drawings, based on Lee’s diagrams of martial arts moves, accented his amazing athletic ability.

WorldStage worked hand-in-hand with the production staff at Signature Theatre on projector placement. “We had to squeeze a slew of projectors into a relatively confined space,” says WorldStage director of emerging technologies, Lars Pedersen. “We needed to provide an image canvas that covered all the scenic surfaces, all the nooks and crannies, without being obtrusive and with minimal impact on the lighting, props and scenic departments.

“We were fortunate in that we were able to place the projectors in close proximity to their respective optimal positions,” Pedersen continues. “The other departments were very accommodating and attuned to our needs. In those few instances where location was less than ideal, the outstanding warp and geometry correction features of the d3 playback system made pixel mapping a pretty straightforward process.”

Maloney, who previously worked with WorldStage on A Night with Janis Joplin, at Broadway’s Lyceum Theater, likes the confident feeling that comes from working with WorldStage. “I really like knowing I’ll get a complete package that will work from day one,” he says. “And if I run into any problems I know they’ll be there to support me.”